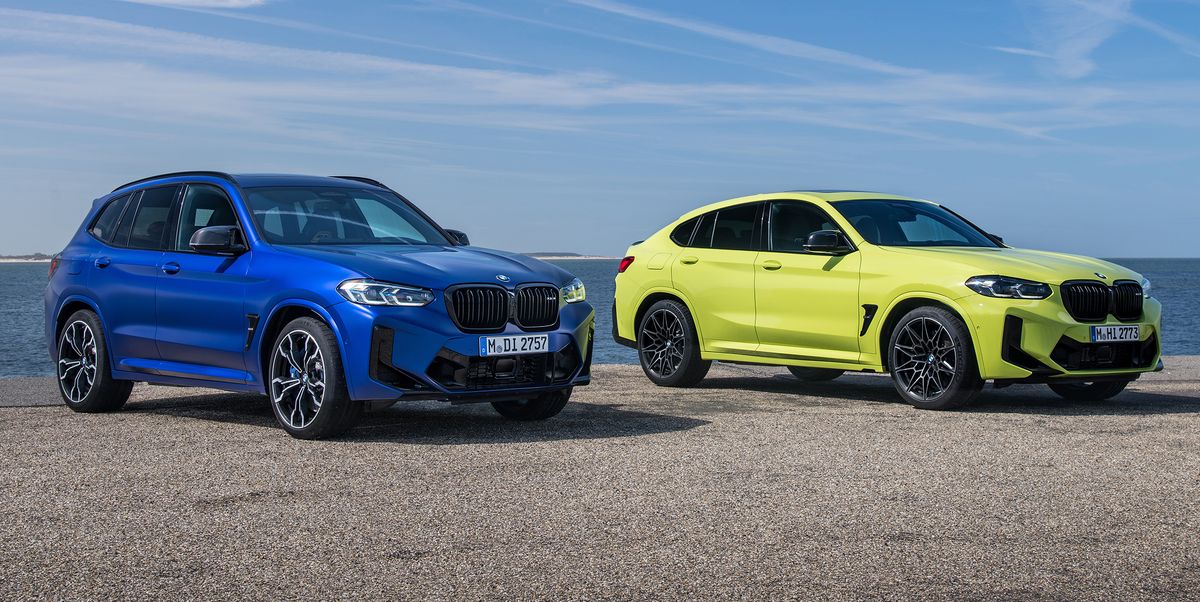 BMW has today announced a mid-cycle refresh for the 2022 BMW X3 M and X4 M SUVs. The utility vehicles get redesigned fascias and upgraded engine internals from the M3 and M4, giving them more torque in both base and Competition trims.

Changes to the exterior design of the X3 M and X4 M aren’t massive, but look close enough and it’s easy to tell what BMW has changed over the old models. Up front, the kidney grilles have (naturally) increased in size, while the headlights have been slimmed down. The front bumpers get bigger openings to better channel air into the engine bay, while a set of new boomerang-shaped side inlets guide air to the brakes. Out back, there are full LED taillights and M-specific spoilers as standard, with carbon fiber-reinforced plastic versions optional.

The biggest changes for the X3 M and X4 M come under the hood. The 3.0-liter S58 twin-turbo straight-six has been upgraded with a forged lightweight crankshaft taken out of the new M3 and M4. The lower weight and reduced rotating mass means the engine now produces more torque—an additional 13 lb-ft for the standard X3 M and X4 M, up to 457 lb-ft, and 479 lb-ft for the Competition models, an increase of 37 lb-ft. Horsepower numbers remain the same, at 473 hp for the base models and 503 hp for the Competition trims.

The newfound torque means the X3 M and X4 M can now sprint to 60 mph in 3.9 seconds, and 3.7 seconds in Competition form. That’s 0.2 seconds and 0.3 seconds quicker than before, respectively. Top speed for all models is electronically limited to 155 mph. Option the M Driver’s package, and you get a voucher to attend an event at one of the BMW Performance Center driving schools, and your top speed limiter rises to 177 mph.

Prices for the X3 M and X4 M remain the same for 2022. That means the X3 M will start at $69,900, while the X4 will be priced from $73,400. The company has yet to reveal updated pricing for the Competition trims, though it’s likely they’ll carry the same $7000 premium as before. All prices exclude a $995 destination charge. Expect the refreshed X3 M and X4 M to hit dealerships by September 2021.