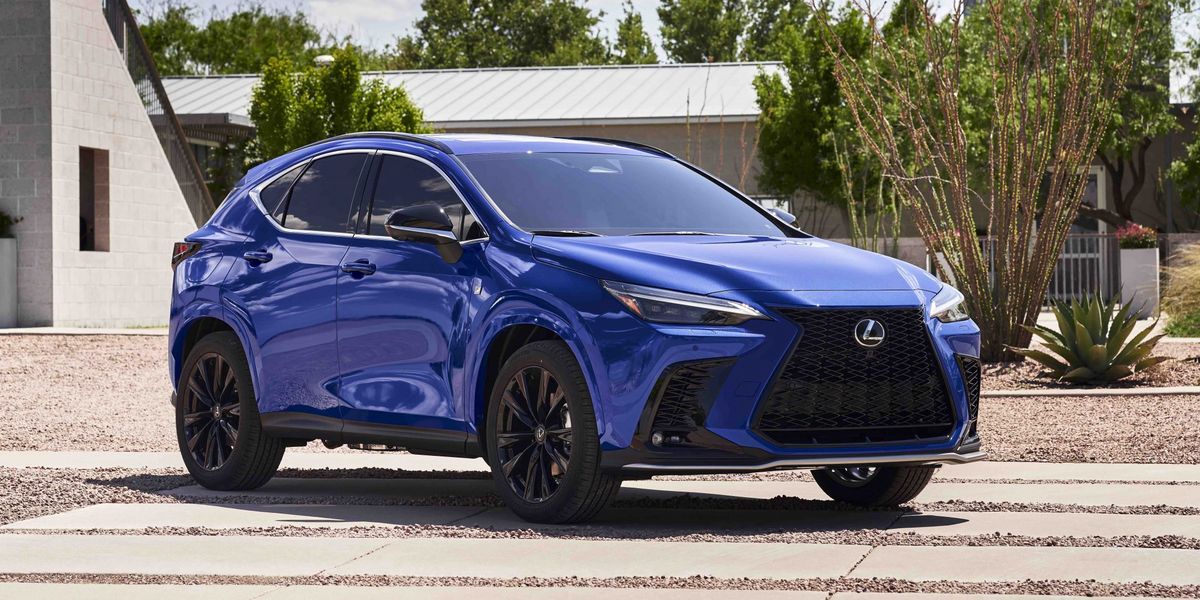 The NX is the second best-selling Lexus model after the RX, so it’s no surprise that the company is pulling out all the stops for the new 2022 NX. This second-generation model will arrive this fall with a new design, a new infotainment system, and a significantly broader range of powertrain options including a new turbo four-cylinder gas engine and a newly available plug-in hybrid model.

The NX lineup starts off with the base NX250, which has the same naturally aspirated 2.5-liter inline-four from the RAV4, producing 203 hp and 184 pound-feet of torque. It has an eight-speed automatic transmission and either front- or all-wheel drive. In terms of power output, the next step up is the NX350h, which combines a 2.5-liter gasoline engine with two electric motor-generators for a total of 239 horsepower—20 hp more than the RAV4 hybrid. Lexus claims up to 36 mpg for the hybrid model.

The nonhybrid NX350 features a new turbo 2.4-liter inline-four with 275 hp and 317 pound-feet of torque, which should make it significantly quicker than the previous NX300 and its less powerful turbo 2.0-liter engine. It also has an eight-speed automatic transmission. And sitting at the top is the NX450h+ plug-in-hybrid, which shares its all-wheel-drive 302-horsepower drivetrain with the surprisingly quick RAV4 Prime. Lexus claims the plug-in model will have an estimated electric driving range of 36 miles, compared with the RAV4 Prime’s EPA-estimated 42-mile range.

The NX’s new exterior design isn’t revolutionary, but we think the spindle grille design is better integrated than before. Out back, the NX incorporates a new “Lexus” script across the tailgate with a different font in place of the typical oval “L” logo, which remains in front.

The biggest changes are seen inside, as the NX debuts a completely new infotainment interface for Lexus. We’re glad to see the old touchpad controller disappear, and the new system uses a centrally mounted touchscreen and a few physical knobs. A 9.8-inch screen is standard, while a huge 14.0-inch touchscreen is optional and incorporates many of the climate controls into the screen. Lexus claims that the new model has more rear-seat room and cargo space than before, but hasn’t yet provided specific dimensions for the 2022 NX.

An F Sport package will be offered for both the NX350 and NX450h+ models that adds appearance tweaks—including dark trim and black 20-inch wheels—along with adaptive dampers. New options include a panoramic sunroof, heated rear seats, and upgraded driver-assistance features including a system that prevents you from opening the door from inside the car if it senses that a bicyclist or another vehicle is approaching.

We assume that the NX will cost a bit more than the current car, which starts at $38,635 for the base front-wheel-drive NX300 model and $41,185 for an all-wheel-drive NX300h hybrid. We’ll find out more information closer to its on-sale date this fall.