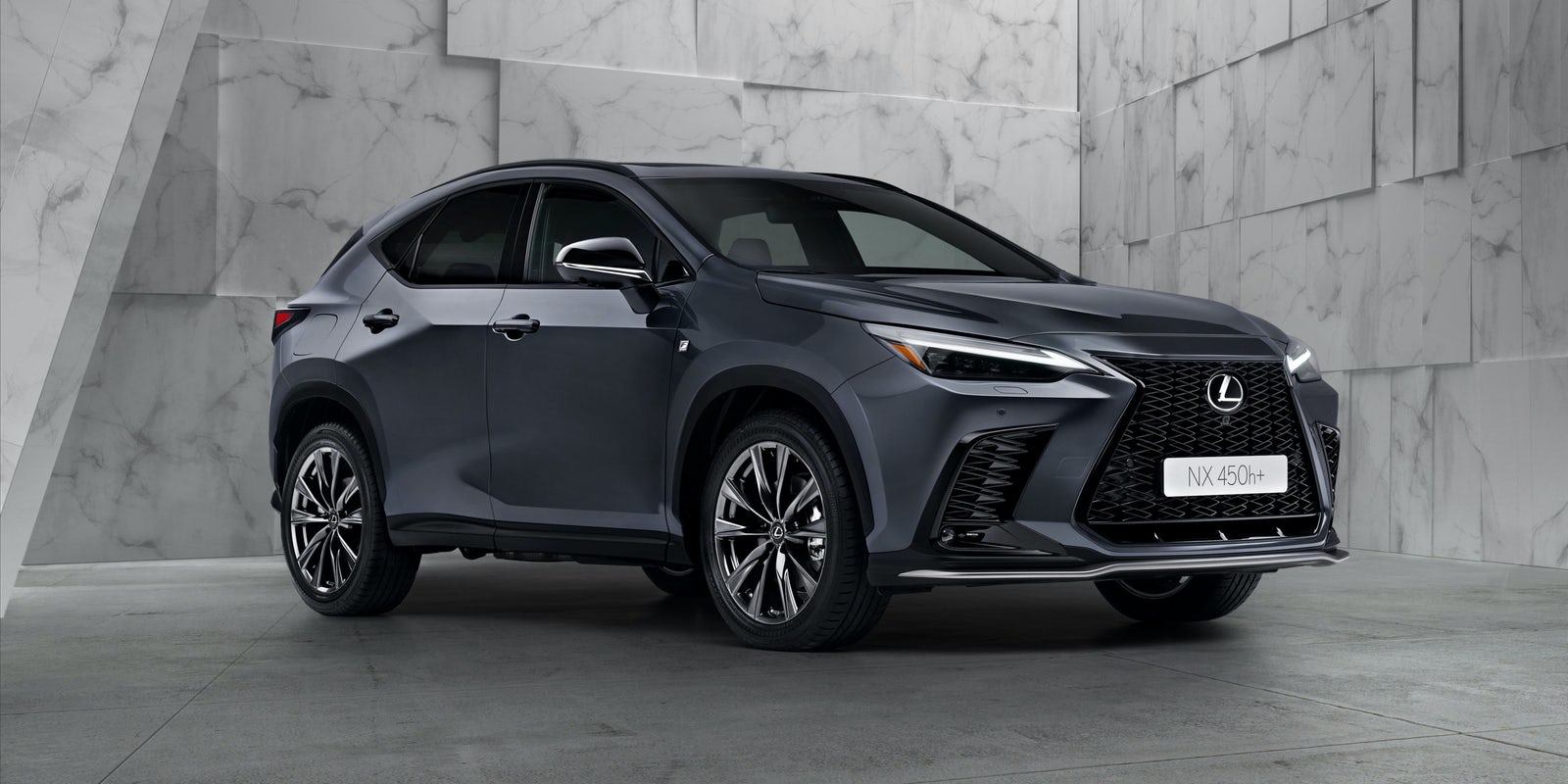 The second-generation Lexus NX will be available exclusively as a hybrid, with a more aggressive look and an overhauled infotainment system. Read on for full details.

A new generation of the Lexus NX has been revealed and will be available exclusively as a hybrid SUV. It goes toe-to-toe with alternatives like the Audi Q5 and BMW X3, and will go on sale before the end of 2022.

Though the new Lexus NX isn’t a huge visual departure from the old car, it certainly takes on a more aggressive look.

The ‘spindle grille’ (as Lexus likes to call it) dominates the front, with angular LED headlights flanking it with strike-through daytime running lights.

Short overhangs give the NX a boxy stance, and you can have those alloy wheels up to 20 inches in size.

At the back, a new LED light bar stretches the width of the car with separate slatted units pushed out at either side. Gone is the usual Lexus badge too, with spaced lettering taking its place.

One area the Lexus NX has seen a total overhaul is inside. Lexus calls it the ‘Tazuna’ cockpit, which is said to be more oriented towards the driver while giving passengers a better sense of space. This is done with a wrap-around dashboard and centre console, and a central display that’s titled towards the driver’s seat.

There’s a completely new infotainment system as well. Gone are the fiddly trackpads of old Lexus cars, replaced with a huge 14-inch touchscreen.

For better or worse, this now plays host to climate controls as well, plus offers support for Android Auto and Apple CarPlay. If you’d rather not use your phone, the built-in sat nav uses cloud services to provide live traffic data and keep itself up-to-date without requiring any sort of data plan.

In the UK, the Lexus NX will only be available with hybrid engines. There’s a ‘self-charging’ one in the form of NX350h, which links a 2.5-litre four-cylinder petrol engine to a battery pack. This produces a total of 242hp and can be had with either front- or all-wheel-drive.

Topping the range is a plug-in hybrid NX450h+, which borrows the 2.5-litre four-cylinder engine (the same as the 350gh) and battery pack from the Toyota RAV4 Plug-In. It produces a total of 306hp.

You’ll be able to get up to 43 miles of range in electric-only mode from the N450 too, with the battery taking 5 hours and 30 mins to charge using a home-installed wallbox. You’ll be able to recuperate some energy when driving too.

An all-electric Lexus NX won’t be available when the car first goes on sale, but it’s likely to follow in the next couple of years.

Coming as standard on every Lexus NX is the manufacturer’s Safety System+ suite of tech.

This includes adaptive cruise control, automatic emergency braking and lane-keeping assistance along with some new goodies including electronic door latches.

These work just the same as any handle inside the car as you’re used to, though can prevent the door from being opened if a risk is detected — such as a cyclist or another car passing by — to prevent you accidentally opening it into traffic.

No word yet on how much the Lexus NX will cost, but it’s set to go on sale before the end of 2021.

It should cost about the same as the current car, which starts from just over £36,000.

Want to keep up to date with the latest news?

Sign up for the carwow newsletter by entering your email address below to receive regular updates featuring our latest videos, reviews, news stories and blog posts from across the world of cars. You can unsubscribe from these emails at any time.

By clicking the submit button you agree to our T&Cs and confirm you have read our Privacy Policy.