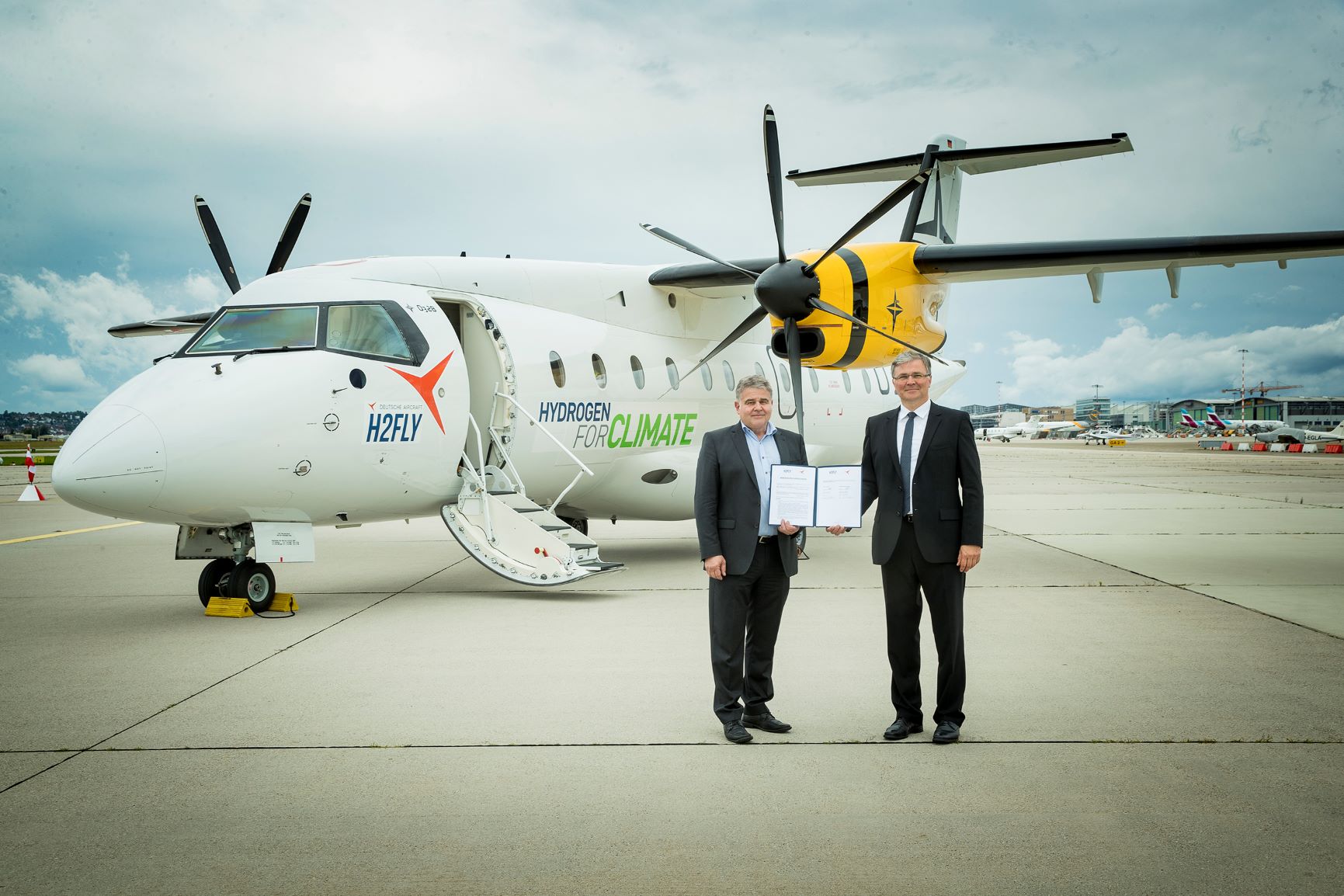 H2FLY, a German start-up developing hydrogen fuel cell systems for aircraft, and Deutsche Aircraft, a new German aircraft manufacturer putting climate change at the centerstage of their design philosophy, today announced they have signed a Memorandum of Understanding (“MoU”) to work together on the research and development of Hydrogen Fuel Cell technology for commercial regional aircraft.

The partnership will see the two companies convert the Dornier 328 aircraft for hydrogen flight, with the demonstrator aircraft expected to take to the skies in 2025. The program is expected to validate the potential for hydrogen to deliver climate-neutral regional air travel with up to 40 seats while demonstrating German leadership in this important field.

Having grown out of a partnership between the German Aerospace Center and the University of Ulm, H2FLY has demonstrated innovative Hydrogen Fuel Cell technology in aviation. The four-seater hydrogen-electric-powered HY4 proved successfully in multiply flight campaigns and over 70 take-offs the applicability of this technology in aviation. With its range of up to 750 km regional markets can be developed.

Today’s announcement marks the next step on the journey towards making the climate-neutral regional flight a reality, with the teams planning to equip the demonstrator aircraft with a 1.5MW hydrogen system, making it the most powerful hydrogen-electric-powered aircraft to date.

The project will see the companies work together on integrating the power system into the aircraft as well as defining the specific technical and certification requirements for fuel cell systems in EASA’s large aircraft class (“CS25”). The project is designed to complement the German Federal Government’s Aviation Strategy.

Commenting on the announcement, Prof. Dr. Josef Kallo, co-founder and CEO, H2FLY, said: “Flying provides an incredibly important opportunity for humankind, but today that opportunity comes at a significant cost to our planet.

“Hydrogen fuel cell technology provides an opportunity for us to completely eliminate carbon and NOx emissions from regional flights and the technology to make that happen is closer than most people think.

“Over the last 16 years, we have worked hard to demonstrate our technology on smaller aircraft, completing record-breaking flights based six powertrain generations. Today we’re pleased to be taking that to the next level with Deutsche Aircraft as we scale our efforts up to regional aircraft.”

Martin Nüßeler, CTO at Deutsche Aircraft, added: “Deutsche Aircraft is convinced that the higher propulsive efficiency of propeller-powered aircraft will drive the change in propulsion technology and will result in reducing fuel consumption and emissions even further in the future. Combining modern propeller aircraft design with zero-carbon energy sources is central to achieving climate-neutral air transportation. “

“We are looking forward to partner with companies that do not only share our passion for the environment but also have the technical expertise to ensure that climate-optimised aviation stays safe and reliable, we are convinced the partnership with H2FLY will move us forward on the path to applying hydrogen fuel cells in larger aircraft.”

Walter Schoefer, Spokesman of the Management Board of Flughafen Stuttgart GmbH (FSG), says: “The process of transforming aviation into a climate-friendly form of air transport is now gaining momentum in a tangible way. This partnership combines the pioneering spirit and world-class science with decades of experience in aircraft engineering. We are convinced that this is a milestone on the road to zero-emission aircraft. As an airport, we are called to act as an enabler on this path. As an airport, we want to continue to be a pioneer in the area of sustainability.”

Thomas Jarzombek, Member of the German Bundestag, Coordinator of the Federal Government for German Aerospace, made the following remarks: “From 2035 onward hybrid-electric flying has to be the new standard in Germany. I am happy about the agreed technological cooperation for sustainable aviation made in Germany. The German Government will continue to support this path to innovation with its R&D funding program aiming to let the vision of a Zero-Emission Aircraft become reality”