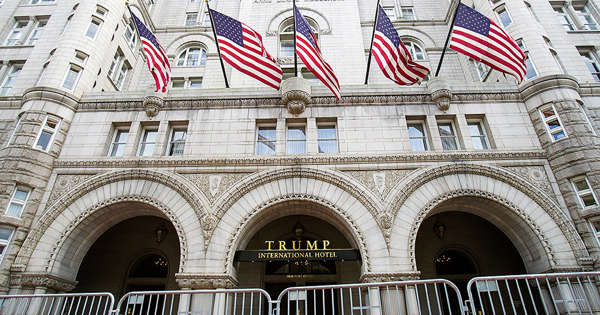 © Greg Nash The Trump International Hotel in Washington, D.C., is seen on June 3

The agency said Friday that “the confirmation was based on an extensive and exhaustive due diligence review of the documentation provided in support of the proposed assignment.”

Trump bought the federally owned Old Post Office building near the White House years ago, but the hotel has recently taken hits with the pandemic and partners pulling out due to the Capitol riot.

The hotel is in the process of being bought by the investment group, which includes former New York Yankees player Alex Rodriguez.

The hotel is expected to be sold for $375 million, with Eric Trump telling The Associated Press the approval by the GSA was the last step before the deal could be settled.

“GSA based this decision on the strength of the partnership between CGI and Hilton and the parties’ commitment to ensuring the success of the future hotel, upon the closing of the transaction, through: (1) executing a long-term property management agreement; (2) providing significant equity; and (3) providing material credit support to assist with securing debt financing,” the agency said.

After the deal occurs, Trump’s name will be taken off the building and the group will work with Hilton to turn the building into a Waldorf Astoria, according to the AP.

The deal the investment group worked out with Hilton is separate from the deal with Trump.

The Hill has reached out to Trump’s team for comment.