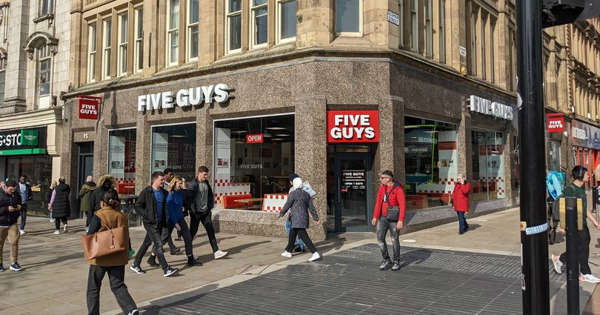 A brand spanking new Five Guys is opening in Manchester today at Piccadilly Gardens. It’s the third spot for the Virginia-founded chain, with other branches already in the Arndale and Trafford centres.

Officially, it’s being called the ‘Piccadilly Station’ branch. This is despite being an eight minute walk away from the station concourse – according to both Google Maps and actual real-life experience.

“This is the same restaurant as the one discussed in council meetings as ‘Piccadilly Gardens’, however the official name of the Five Guys branch is ‘Piccadilly station’ due to proximity to the station,” said a spokesperson for the chain.

The burger restaurant is in the plot of the former Yorkshire Building Society at the bottom of Oldham Street. The new branch already has two Google reviews, despite not opening until 11am – one ‘Fresh and good quality. A bit of overpriced’, the other simply ‘very nice’.

The branch was all set to open 24 hours a day, when the plans were first announced. However, residents who live above the unit made objections to the licensing submission. They raised concerns over the increasing levels of anti-social behaviour already going on in Piccadilly Gardens in meetings with the chain.

© Manchester Evening News Won’t be opening 24 hours after all


Spokesman for Five Guys, Graham Cushion told the M.E.N: “To be honest, we didn’t anticipate issues with local residents simply because of the existence of Burger King and McDonald’s in such close proximity.

“However, I think the residents did have concerns because we’re actually proposing to house in the ground floor unit of the very building that they live – albeit there’s another commercial unit above us before the residential levels. Having been alerted about their concerns, we immediately engaged with them, as you would expect.”

After hearing the concerns of local residents, it scaled back its planned opening times to 11pm during the week, and midnight on Fridays and Saturdays.

Get the latest What’s On news – from food and drink to music and nightlife – straight to your inbox with our daily newsletter.