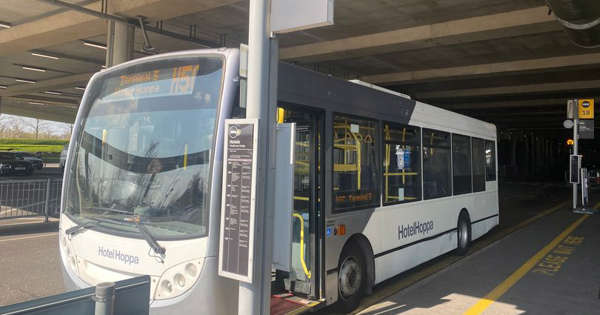 The recent price increase of Transport for London (TfL)’s Hopper bus fare from £1.55 to £1.65 at the start of this month may have seem at little unfair. Compared with non-TfL bus routes which operate in London, the higher fare is still relatively reasonable. Indeed, there is no limit on the maximum passenger fare for non-TfL bus fares within the capital.

As you would expect, some tourist-focused sightseeing buses have understandably high fares although these are matched by a different customer experience, often with tour guides. Regular passenger services can vary, but there is one example which sets a very high price for its service offering.

The Heathrow Hotel Hoppa is a series of seven shuttle bus routes which link Heathrow Airport’s terminals 2, 3, 4 and 5 with 34 different hotels on the airport perimeter roads. The routes offer a near door-to-door service as many of them stop directly outside the hotel receptions. As with many buses in the vicinity of Heathrow Airport, since Heathrow stopped subsidising a free-fare zone due to pandemic losses, many passengers are charged premium fares – the Hotel Hoppa is no exception – with single tickets purchased on the bus costing £6 and return tickets £11, almost four times the price of the equivalent TfL bus fare.

READ MORE: London buses: All the capital’s bus routes which go along motorways

Two of the seven Hotel Hoppa routes, H2A and H2C, provide a link between Terminal 3 and the Renaissance Hotel on Bath Road one mile away. Together the two routes provide two to three buses per hour between 5am and 11pm each day. That hotel is also right next to a TfL bus stop where four daytime and two overnight TfL bus routes provide four to 20 buses per hour 24/7. A two mile return trip between Terminal 3/Central Bus Station and the hotel takes around 12 minutes via both options – the price being a key differential.

Oyster cards and Travelcards are not accepted on the Hotel Hoppa services but there are some ticket price discounts available on its website with the option of ‘Family’ tickets.

Want more from MyLondon? Sign up to our daily newsletters for all the latest and greatest from across London here.