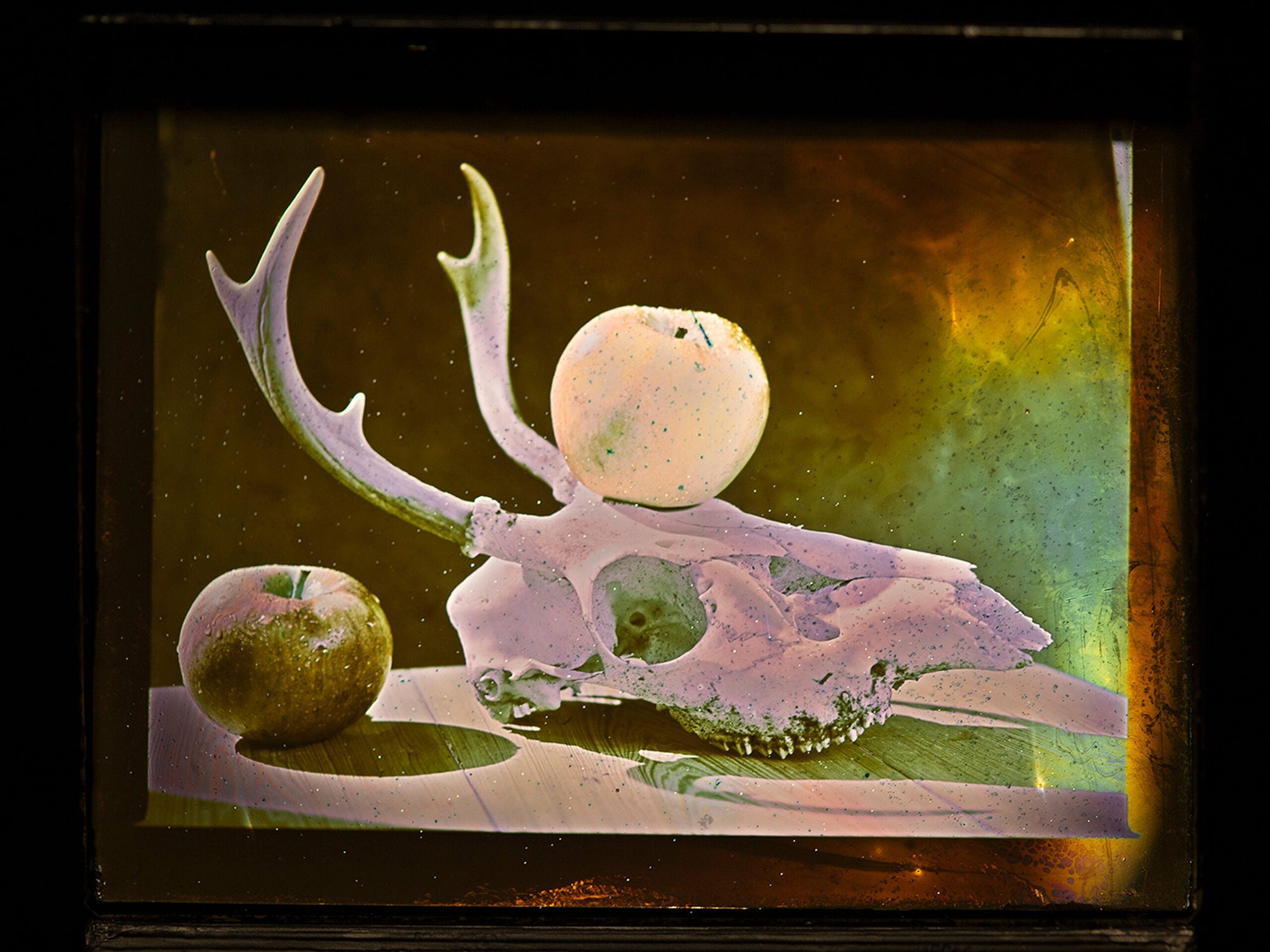 Nick Brandreth fell in love with alternative processes during an apprenticeship at the George Eastman Museum in Rochester, New York over a decade ago. When the apprenticeship ended, he was hired by the museum and has been leading workshops and researching historic photographic processes ever since. He can teach you how to make film, paper and then use those to create a print. Although he’s spent plenty of time making collodion plates, it’s the Lippmann color process that’s made the biggest impression.

What is the Lippmann process?

Lippmann plates are the only naturally occurring color photographic process. The colors that your eye detects only exist when white light is broken down into its respective colors.

“You’re recording a standing wave—it’s when the light bounces off of something and it crosses its path half a wave out of phase,” Brandreth explains. “If you walk through a parking lot and see prismatic colors in an oil slick, there’s no color in the oil slick—what you’re seeing is the breakdown of white light that hits the surface of the oil.”

Viewing a Lippmann color plate is kind of like seeing swirling colors in an oil slick, except instead of abstract shapes you’re able to capture photographic details that appear and disappear as you move the plate. If you’ve never heard of the Lippmann process you probably aren’t alone.

Invented by George Lippmann, this two-step process won the Nobel Prize in Physics in 1908, but never gained the type of commercial success that other photographic processes did. Although Lippmann’s process allowed one to create images, they couldn’t be replicated. In the modern era, it’s an extremely niche photographic process, that’s very expensive to do if you lack connections to a photographic institution like the George Eastman House. There are only a few photographers around the globe that still make Lippmann plates and Brandreth is one of them.

Here’s how he does it.

Brandreth creates his Lippmann plates with a panchromatic gelatin emulsion with ultra-fine grain silver— “little nanometers is how small these grains are, that’s the trick, that’s the reason it works,” he says. With most emulsions, you want the plate to ripen so that it can grow additional crystals, but in making Lippmann plates it’s important to skip this step. Brandreth’s Lippmann plates need an emulsion that is crystal clear in order to record an image. This ultra fine-grained emulsion makes the plates insensitive to light, which means that he can quickly coat the plates under subdued red light, rather than absolute darkness.

Back in the day, a special back that contained pure mercury was used to seal the emulsion—one of the reasons that it’s rare to see photographers using the process.  Brandreth uses a method called “air gap reflection” to seal his emulsions—it existed back when the process was invented but didn’t work as consistently as using pure mercury. Luckily, the dyes that allow the air gap reflection to sensitize the emulsion-covered plate to blue, green, and red light waves have improved a lot since the late 1800s.  “When the gelatin and air meet one another, the light can bend backward and go back through the emulsion at half a wave out of phase with itself,” he says.

To record an image to a Lippmann plate you need to photograph through the back of the plate. Brandreth uses a modified Bronica camera that can hold one Lippmann plate at a time. He flipped the ground glass in the camera upside down so that he can properly focus it when shooting the plates. In peak summertime, his exposures are anywhere between three to eight minutes depending on what his aperture is set to.

When composing for a Lippmann plate, he typically likes to set up a still-life scene in bright daylight because of the long exposure times. “It’s part of why it never took off commercially as a process,” he says. “They’re extremely slow and they’re very hard to look at. If you don’t look at it at the right angle, there’s nothing there.”

The final step of Brandreth’s process is to mount the plate underneath a prism. Because the emulsion is made of gelatin, it can easily react with air or moisture which will lead to the colors in the plate shifting and changing over time. He uses Canada balsam to mount his plates to the shallow prisms. This final step preserves the Lippmann plate and creates an easy way for one to view the image on the plate. “It’s essentially a mirror,” he says. “When it hits that perfect angle I can see the colors, but I can also see the highlight from my light source.”