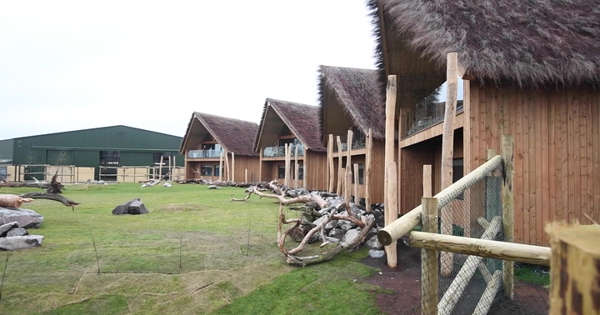 Eight more luxury lodges have opened at West Midland Safari Park. From Friday (April 15) people will be able to stay overnight and have a front row seat to watch the giraffes and rhinos.

But the thrill of seeing the wild animals up close and personal does come at a price – to stay in the luxury lodges costs £490 a night. Park bosses insist that all the money from the fees go back into caring for the animals.

The eight new lodges overlook the enclosures housing the giraffes and white rhinos. They open on Friday and are expected to be as popular as the existing accommodation.

Read more: Tourist hotspots in and around Birmingham which people travel miles to

Next to open are four lodges within the tigers’ enclosure. These are due to be ready by the end of August and will bring the total number of overnight accommodation to 22. There are already eight lodges next to the cheetah and elephant enclosures and two cottages in the red panda’s pen.

West Midland Safari Park managing director, Chris Kelly, revealed that more lodges are planned. Next to come is accommodation overlooking the lion and hippo enclosures. These are due next year, subject to planning approval being granted.

Mr Kelly said it was phase two of a five year development plan for the park. And he pledged that all the proceeds from the lodges went back into animal care.

The park was forced to close during all the lockdowns and reopened last April. Since then, people have been coming from all over the UK to stay at the lodges, Mr Kelly said.

And he joked that the lodges had changed the dynamics of the park and turned the tables. “The animals can now come and watch the humans,” he said. “For the cheetahs, lions and tigers it’s like a takeaway, they’ll come up to the window and look at you and think, I could eat you.”

The existing 18 lodges and cottages are doing a roaring trade for the park. The elephant and cheetah lodges are booked up until November 2022, with the rhino and giraffes ones booked up until the end of September 2022.

But they’re not cheap. Prices for the elephant and cheetah lodges are around £500 a night, with the red panda cottages being an eye-watering £850.

The two-storey giraffe lodges sleep up to five people and the rhino ones can accommodate up to six people. Prices are from £490 a night for two people, with extra guests at £175 (£125 for children aged three – 15). These prices include two day admission to the park and rides, breakfast and dinner, free wi-fi, hot drinks and 24 hour concierge and parking.

For more details about how to book one of the lodges, click here.