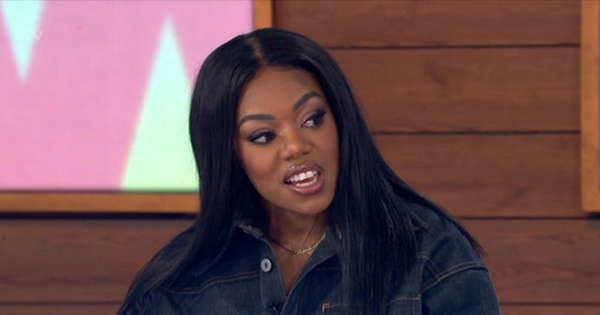 The Loose Women ladies were shocked on Friday’s show when new panelist Lady Leshurr admitted she is trying to put weight on.

Kaye Adams, Nadia Sawalha and Sunetra Sarker were joined by Lady Leshurr as they discussed calories now appearing on menus in restaurants.

Kaye, 59, kicked off the conversation by telling her co-stars that she and her daughter were counting calories when they went out for dinner earlier this week.

“It was such a strange thing for me, because this first was raised a couple of years ago as an idea, and at that point I remember thinking, ‘I think that’s a really good idea’,” Kaye explained.


“But I sat down with her and she’s 19 and it was there and the only thing she looked at was the numbers and then I did the same thing and I suddenly went, ‘woah I don’t think this is a good idea’.”

Nadia, 57, went on to say that she thinks “it’s a huge step back” as she spoke about constantly counting calories in the past.


Lady Leshurr, real name Melesha Katrina O’Garro, then said: “I reckon the waiters in every restaurant should come through with like, ‘do you want a calories menu or no calories menu?’ so you don’t get to see it if you don’t want to.

“Because, for me, it’s like I know someone that is very like, ‘Oh I can’t have that and that and I can’t drink tonight because then I’m gonna have to go to the gym’, it gives me anxiety but then I’m the opposite because I’m trying to put on weight,” she continued.


At that point, the rest of the panel were heard gasping as Sunetra replied: “What?!”

“Look at me! How can you question what? Look at me! My clothes are falling off me!” Lady Leshurr joked.

She then explained: “In general, I don’t ever look at what I’m eating and I’ve got a fast metabolism, which is good.”

Lady Leshurr went on to say that sometimes people call her a “lucky bugger” for being able to eat what she wants, but she then stressed: “I really do want to put on weight!”