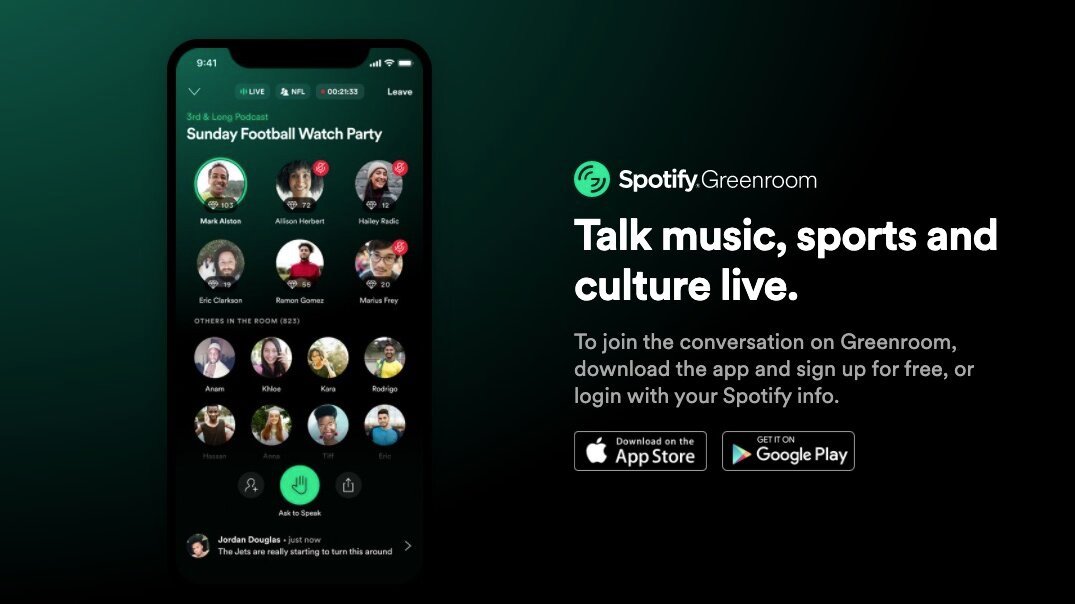 Such figures inevitably raise questions about Spotify’s business model, and the amount of money it’s paying out to rightsholders and “creators” – i.e. music artists and podcasters on its platform – each year.

Today (June 16), Spotify has officially welcomed a new type of content “creator” onto its service – and committed to paying out a stack more money to them across the course of 2021.

These “creators” are the celebrities, politicians and aspirational keynote speakers who’ll potentially appear on Spotify Greenroom, the streaming platform’s rival to Clubhouse – the live/conversational audio platform that launched last year.

Spotify Greenroom is now available on iOS and Android in over 135 markets around the world. Greenroom users also don’t even need a Spotify account to download and access the app, either.

On Spotify Greenroom, users can host or participate in live rooms, where audiences can log in and join conversations covering a range of topics spanning music, culture, and entertainment, says Spotify in a blog post.

Some may say that Greenroom differs from Clubhouse in name only, but the two are at odds in how they fund creators.

In April, Clubhouse announced ‘Payments’, a service that allows users to donate to creators directly, with 100% of earnings going into their pockets.

Spotify, meanwhile, is paying creators from its own pocket, via the newly-announced Spotify Greenroom Creator Fund.

Spotify hasn’t put a solid figure on the amount it intends to pay these ‘Creators’, but it says there are three main facets to the fund:

The Fund is open for registrations now, and will go live and begin payouts later this summer.

Spotify says it is building Greenroom “with the creators and artists in mind who make Spotify great”, but no creator announcements or specific events have been announced.

Spotify also says it hopes Greenroom is an “extension of the [Spotify] app already loved by 356 million listeners”.

However, questions are now emerging about the long-term potential for drop-in audio chat social platforms like Clubhouse and Greenroom.

While Clubhouse closed an ‘an undisclosed $4B valuation Series C round’ in April, reported TechCrunch, interest in the app has quickly dwindled.

Clubhouse had around 13.4 million users in late March. But after peaking in February (9.6 million downloads), it had 2.7 million in March and just 900,000 in April, reports the BBC.Music Business Worldwide