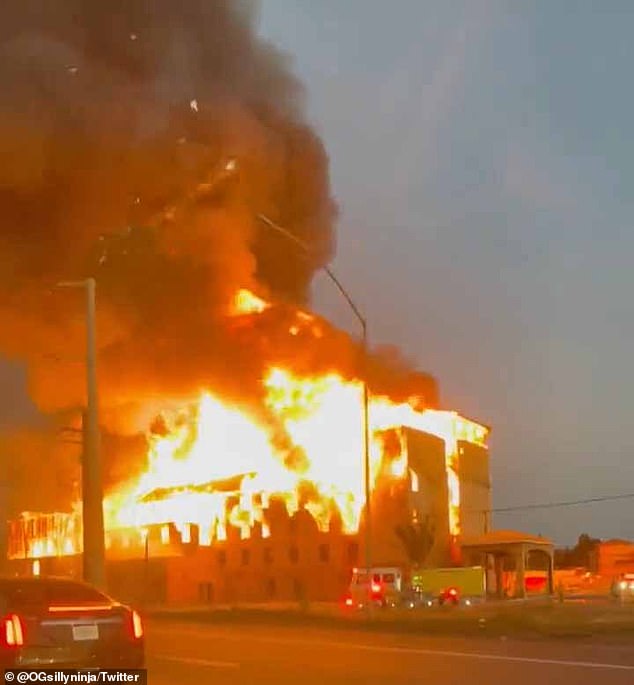 A massive fire at the hotel under construction in California has closed one of the state’s major highways.

US-101 was closed in Camarillo as the fire billowed huge plumes of smoke on Tuesday night and huge flames stopped traffic along the route.

The inferno was first reported just after 7 p.m. near the Camarillo Outlet Mall.

A driver who was videoing the fire noted how he could feel “the heat” as he drove by.

The entire hotel construction was engulfed by a huge fireball

The building began to collapse on itself, leaving only the shell of the building

Tuesday there were flames in the evening sky

Despite the severity of the fire, traffic was still able to drive on the highway for quite some time

It quickly escalated and by 7:20 p.m. more resources had to be deployed.

The fire appeared to have started on the second floor of the four-story building, which was quickly engulfed.

Within an hour, the structure began to collapse on its own.

Despite the severity of the fire, traffic was still able to drive on the highway for quite some time.

The hotel was part of a project known as the Mian Plaza and Convention Center.

The construction project included the development of two Hilton hotels with nearly 300 rooms and a 17,500 square foot conference center.

By 9 p.m., the fire appeared to have been extinguished with crews tamping the hot spots as an investigation into the cause of the fire began.

Earlier the fire seemed to be getting under control, but things escalated

The fire could be seen from miles away, as this photo from a helicopter shows