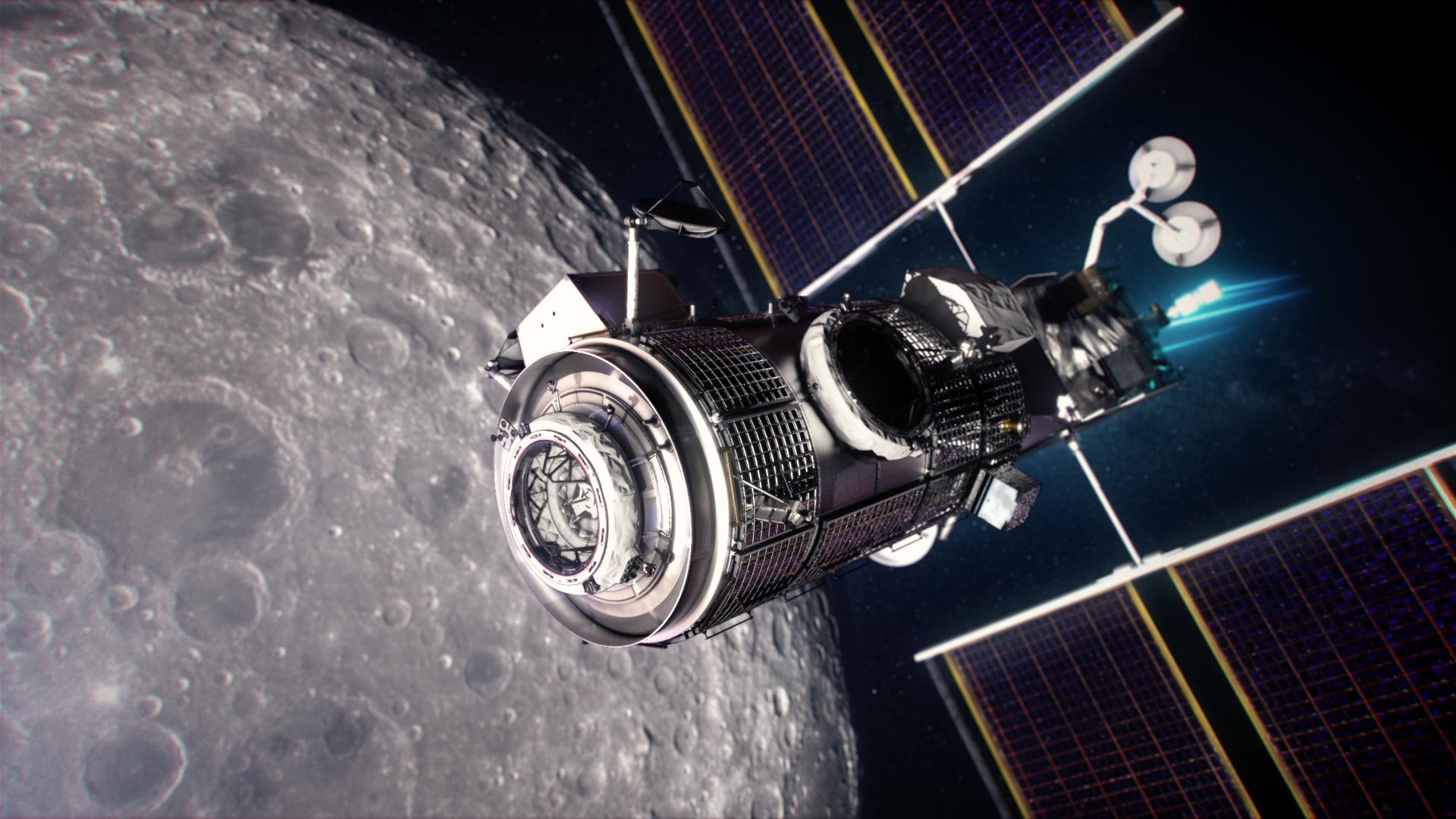 Illustration showing a close-up of the Habitation and Logistics Outpost (HALO), one of the elements of Gateway. Credit: NASA

NASA and Northrop Grumman of Dulles, Virginia, have finalized a contract to develop the Habitation and Logistics Outpost (HALO) for Gateway, which will be a critical way station and outpost in orbit around the Moon as part of NASA’s Artemis program.

NASA and its commercial and international partners are building Gateway to support science investigations and enable surface landings at the Moon, which will help prepare astronauts for future missions to Mars.

The firm, fixed-price contract is valued at $935 million. Under the contract, Northrop Grumman will be responsible for attaching and testing the integrated HALO with the Power and Propulsion Element (PPE), being built by Maxar Technologies. Northrop Grumman will also lead the integrated PPE and HALO spacecraft turnover and launch preparation with SpaceX, and support activation and checkout of HALO during the flight to lunar orbit. NASA is targeting November 2024 to launch the integrated spacecraft on a SpaceX Falcon Heavy rocket.

“NASA is building the infrastructure to expand human exploration further out into the solar system than ever before, including Gateway, the lunar space station that will help us make inspirational scientific discoveries at and around the Moon. Just as importantly, these investments will help NASA carry out the United States’ horizon goal: to further develop and test the technology and science needed for a human trip to Mars,” said NASA Administrator Bill Nelson. “The HALO is a critical component of Gateway, and this exciting announcement today brings us one step closer to landing American boots on both the Moon and Mars.”

HALO is where astronauts will live and conduct research while visiting the Gateway. The pressurized living quarters will provide command and control systems for the lunar outpost, and docking ports for visiting spacecraft, such as NASA’s Orion spacecraft, lunar landers, and logistics resupply craft. The HALO module will serve as the backbone for command and control and power distribution across Gateway and will perform other core functions, including hosting science investigations via internal and external payload accommodations and communicating with lunar surface expeditions. HALO also will enable the aggregation of additional habitable elements to expand Gateway capabilities. Immediately after launch, the Heliophysics Environmental and Radiation Measurement Experiment Suite, built by NASA’s Goddard Space Flight Center in Greenbelt, Maryland, will begin conducting research outside of the integrated spacecraft.

“This is a major step on the path for Artemis, not just for NASA, but for the combined team, including our commercial and international partners,” said Kathy Lueders, NASA associate administrator for Human Explorations and Operations. “Gateway will provide unprecedented access to the Moon and symbolizes the expansion of our partnerships into deep space.”

The integrated PPE and HALO will be the Gateway’s foundation, enabling humanity’s first permanent outpost in orbit around the Moon. Located tens of thousands of miles from the lunar surface at its farthest point and within easy range of lunar landers at its closest, the Gateway will be in a near-rectilinear halo orbit. This orbit will allow NASA and its international and commercial partners to conduct unprecedented deep space science and technology investigations, and conduct sustainable lunar exploration.

“This action puts in place the final contract component of a diverse, multi-faceted team –distributed across the country and within some international partner facilities – working together to create and implement the initial Gateway capability. We are excited to work with Northrop Grumman and all the partners to deliver the cornerstone of sustainable human exploration in cis-lunar space,” said Dr. Jon Olansen, NASA’s manager of the HALO project.

HALO leverages contributions from the Gateway international partners for robust capabilities. Batteries provided by the Japan Aerospace Exploration Agency (JAXA) will power HALO until PPE solar arrays can be deployed and during eclipse periods. Robotic interfaces provided by the Canadian Space Agency will host payloads and provide base points for Canadarm3 robotic operations. ESA (European Space Agency) will provide a lunar communications system to enable high-data-rate communications between the lunar surface and Gateway. With three docking ports, HALO will be the hub for international Gateway expansion in the future, including an international habitat that ESA and JAXA will provide, and an ESA-provided refueling module. The docking ports also will host a human landing system for lunar surface expeditions and logistics resupply spacecraft. As the Gateway hub, HALO will provide power, data, airflow to each of these ports, as well as thermal conditioning to assist future elements and spacecraft in controlling the temperature of their equipment and habitable environment.

“Leveraging our success with our Cygnus spacecraft, Northrop Grumman is perfectly positioned to deliver the HALO module, a critical piece for NASA’s Artemis program and our journey to the Moon and beyond,” said Frank DeMauro, vice president and general manager for tactical space systems at Northrop Grumman. “After recently completing a successful preliminary design review, we now look forward to completing the detailed design efforts and eventually bringing HALO to life in our Gilbert, Arizona, facility while also providing integration services for the final, combined vehicle before launch.”

HALO’s design is based on Northrop Grumman’s Cygnus spacecraft, which has completed 15 resupply missions to the International Space Station to date. A previous contract for HALO, awarded in June 2020, funded work through preliminary design review, one of a series of checkpoints for the complex engineering project. The review process for the module, completed in May, assessed all of the spacecraft’s design to ensure the overall system is safe and reliable for flight and meets NASA’s mission requirements.