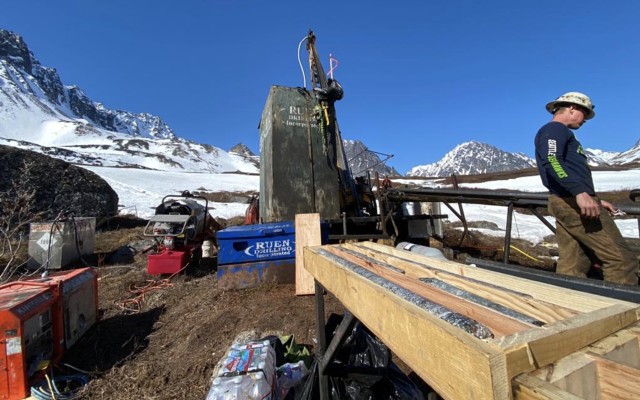 Alaska gold hunter Nova Minerals (ASX: NVA) has released what it calls ‘significant’ gold assays at its Korbel Main project that are such that the company believes they may have a major impact on pit design and project economics.

These, Mr Gerteisen says, “will no doubt have a major impact on our pit optimisations and project economics”.

“In light of this, we need to consider how these new results are going to be incorporated into our scoping study.

“Our lead engineers have strongly advised that these drilling results are likely very material and should ideally be included in our scoping study before [its] release,” he added.

They have requested a time extension to the scoping study deadline in the light of the latest results.

The latest assays from hole KBDH-072 returned an overall average grade of 0.7 grams per tonne gold over 308m from surface.

Nova’s Estelle gold project — of which Korbel Main is part — is located approximately 177km northwest of Anchorage, Alaska’s major city, which provides a large labour force and all essential services. Access is via snow road or by air, with the nearby airstrip being able to handle DC3 aircraft.

Mr Gerteisen said a delay to the study is the best course of action so its gives shareholders an accurate picture.

In the meantime, he says, the company expects these high-grade results to continue to flow as drilling intersects more of these “blow-out” zones which the geologists are seeing in the drill cores.

What Nova terms aggressive in-fill and extension drilling is continuing at Korbel Main.

This work is at present focused on the higher grade southeast zone, aimed at increasing the 4.7 million ounce resource.

A fifth drill rig is expected to reach the site in the coming weeks to ramp up the drilling campaign.

It was the Russians who first discovered gold in Alaska, 19 years before the territory was transferred by the Tsarist government to the United States in 1867.

The territory also saw the famed Nome gold rush (1899-1909). Today the state has the second largest number of gold mines in the US (after Nevada) and some deposits are amongst the largest in the world.