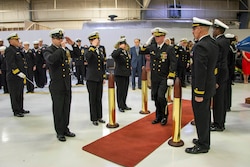 Deputy Commander, Navy Recruiting Region Central, Cmdr. David Pavlik, was the guest speaker at the ceremony and credited Singh for his leadership during difficult times, which included the global COVID-19 pandemic.

“In spite of all of this, you kept your voice, your candor and your moral compass. That enabled you to lead your team through it,” Pavlik said.

NTAG Heartland recruited more than 1,400 enlisted personnel and assessed more than 100 officers during Singh’s tenure as commanding officer, which began on Aug. 27, 2020.

“If anyone asks my family, they will wholeheartedly agree that for the past 18 months, and 24 hours a day, I have lived and breathed NTAG Heartland, sometimes painstakingly so,” Singh said. “To all of the Sailors and civilians of NTAG Heartland, thank you. Thank all of you for making that worthwhile.”

Upon assuming command, Nelson stressed the importance of the command’s mission to the Sailors and civilians of NTAG Heartland. He said that his vision of what NTAG Heartland is tasked with is “to defend the people and ideas of this nation by manning the fleet through changing the lives of young men and women with Navy opportunities.”

“You all made that choice at one point. You know why you did it. We need to continue to bring that out to our public so that we can give them those opportunities,” Nelson said.

Nelson reported as executive officer of NTAG Heartland in August of 2020. His background includes a Master of Science in modeling, virtual environments, and simulation (MOVES) from the Naval Postgraduate School and an Associate of Arts in Spanish from the Defense Language Institute. Nelson served as the chief engineer on USS McClusky (FFG 41), the officer in charge of Surface Warfare Detachment Three (SUW 3) and executive officer of USS Fort Worth (LCS 3).

During the ceremony, both Pavlik and Singh expressed their confidence that Nelson was the right candidate for his new position.

“You’re on your way to do great things as CO (commanding officer),” Pavlik said. “I have the highest confidence in you and your leadership, and I strongly believe that you’re the right person at the right time for Team Heartland.”

“You are orders of magnitude more knowledgeable about recruiting than I was at this point, and I see how much you care about NTAG Heartland,” Singh said. “I can’t think of anyone better to hand our command to.”

NTAG Heartland is responsible for the Navy’s enlisted and officer recruiting, covering nearly 140,000 square miles of Michigan, Indiana and Northwest Ohio and is headquartered in Detroit.

Navy Recruiting Command consists of a command headquarters, three Navy Recruiting Regions, and 26 Navy Talent Acquisition Groups that serve more than 1,000 recruiting stations across the world. Their combined goal is to attract the highest quality candidates to assure the ongoing success of America’s Navy.

This work, NTAG Heartland Changes Command, by PO1 Jason J Behnke, identified by DVIDS, must comply with the restrictions shown on https://www.dvidshub.net/about/copyright.