Out of This World: ‘Space Lounge’ Offers Fun 20 Miles Above Earth’s Surface 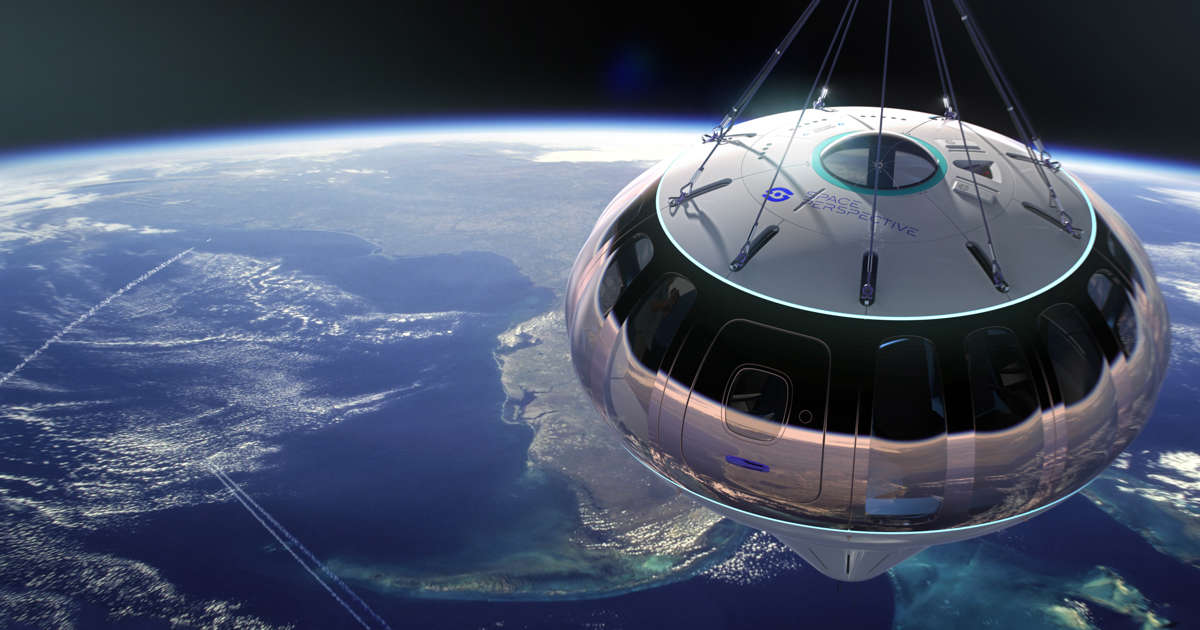 
If you ever wanted to sip a cocktail while staring down at the Earth, one company is making that experience come to life.

Starting in 2024 Space Perspective will bring Earth dwellers to the edge of space courtesy of its sleekly-designed Spaceship Neptune. It is described as a carbon-neutral, zero-emission vessel that travels 20 miles above Earth’s surface.

The luxurious “Space Lounge” features nine reclining plush seats, for eight passengers and one pilot; a refreshments bar with storage space; Wi-Fi with the ability for interior and exterior cameras to live-stream flights; 360-degree panoramic windows described as the largest to travel to that high a distance; a restroom; and a dark interior designed to reduce glare and reflection.

The state-of-the-art SpaceBalloon, as described by Space Perspective, stands 700 feet tall at launch. Liftoff takes place at dawn from Space Coast Spaceport, located adjacent to Kennedy Space Center in Florida, with the capsule ascending 100,000 feet at a speed of 12 miles per hour. A gradual two-hour descent will conclude with “a splash in the ocean” where the passengers, capsule and SpaceBalloon are retrieved.

Flights last six hours from launch until landing, with two hours each designated for the ascent, floating in the atmosphere and the descent.

But the trip isn’t cheap. Space Perspective said tickets cost $125,000 each and that 600 of them have already been purchased. The first flights are expected to begin in late 2024 and are fully booked. Open spots will next be available in 2025.

A refundable $1,000 deposit is required for booking, and cryptocurrency is accepted.

According to a ValuePenguin in 2021, 49 percent of Americans said they want to travel to space. However, of those who do want to travel out of the atmosphere, just 19 percent said they would pay $100,000 or more for the experience.

Space Perspective Founder and Co-CEO Jane Poynter said in a statement that “it is hard to overstate the importance of this design breakthrough,” adding that the SpaceBalloon “is setting the standard in space tourism.”

“Our mission is to inspire space explorers to connect more closely with our planet and each other, and the environment in which they travel with us is central to this,” Poynter said. “Our Space Lounge is a world away from the white, utilitarian environments you find in other spacecraft.”

Poynter’s mention of “space tourism” has been disputed, though, as companies Virgin Galactic and Blue Origin travel over 50 and 62 miles above sea level, respectively. SpaceX flights fly even higher.

But as Poynter told AFP, “We are above 99 percent of Earth’s atmosphere.”

In 2021 Poynter wrote an op-ed for Newsweek, telling about how she grew up in the United Kingdom and had an affinity for science fiction and authors like Isaac Asimov. The concept of the SpaceBalloon began in the 1990s, she explained, with discussions between her and her husband, Taber MacCallum, who is also the founder and Co-CEO of the company.

“Our world-class expert crew, who have been integral to all human SpaceBalloon flights in the last 50 years, trialed hundreds of layouts and we’ve secured a patent for our structural engineering, with two design patents pending,” MacCallum said. “The quintessential spaceflight experience is a shared human experience and we’re super proud of this significant milestone as we move full steam ahead toward commercial flight.”