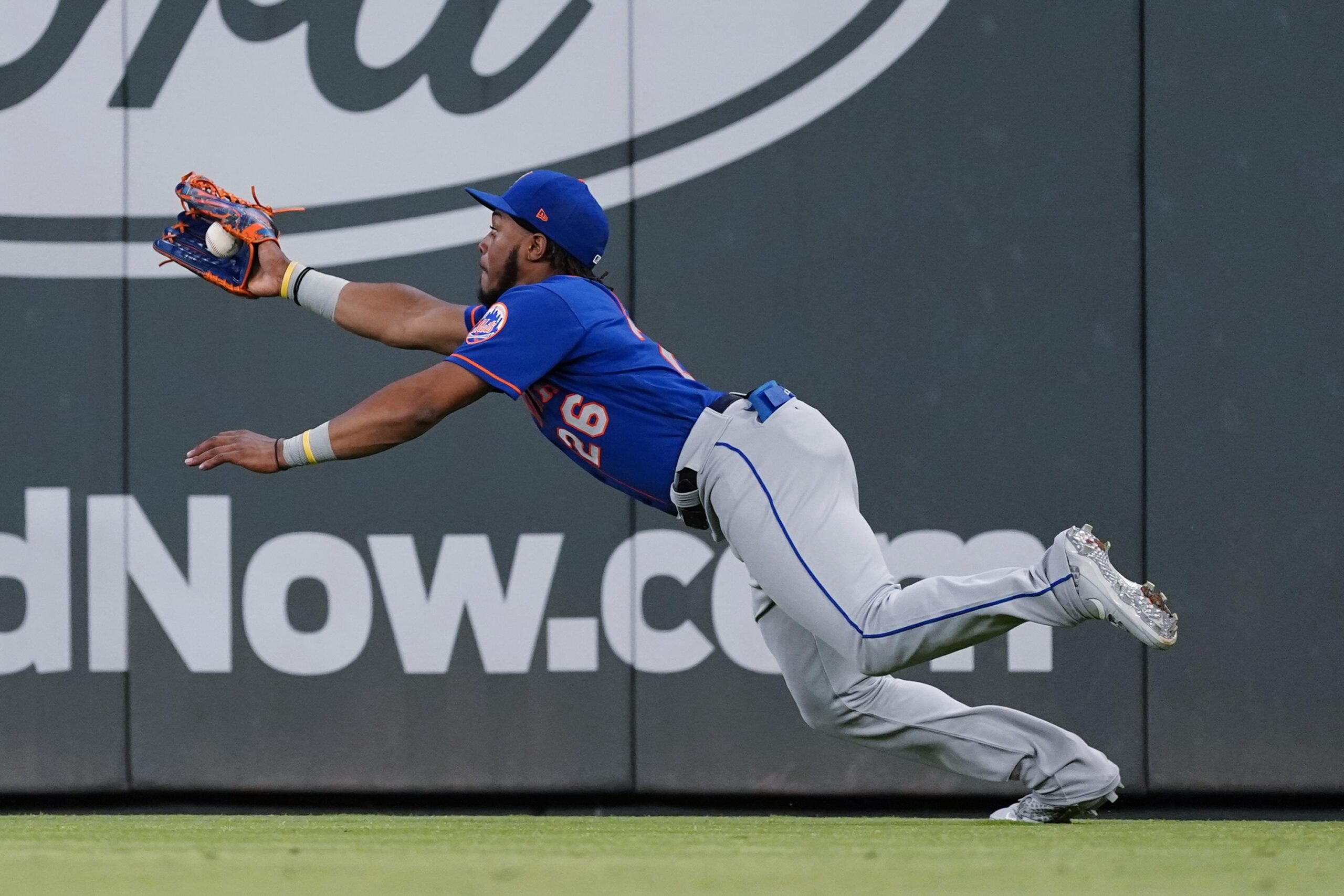 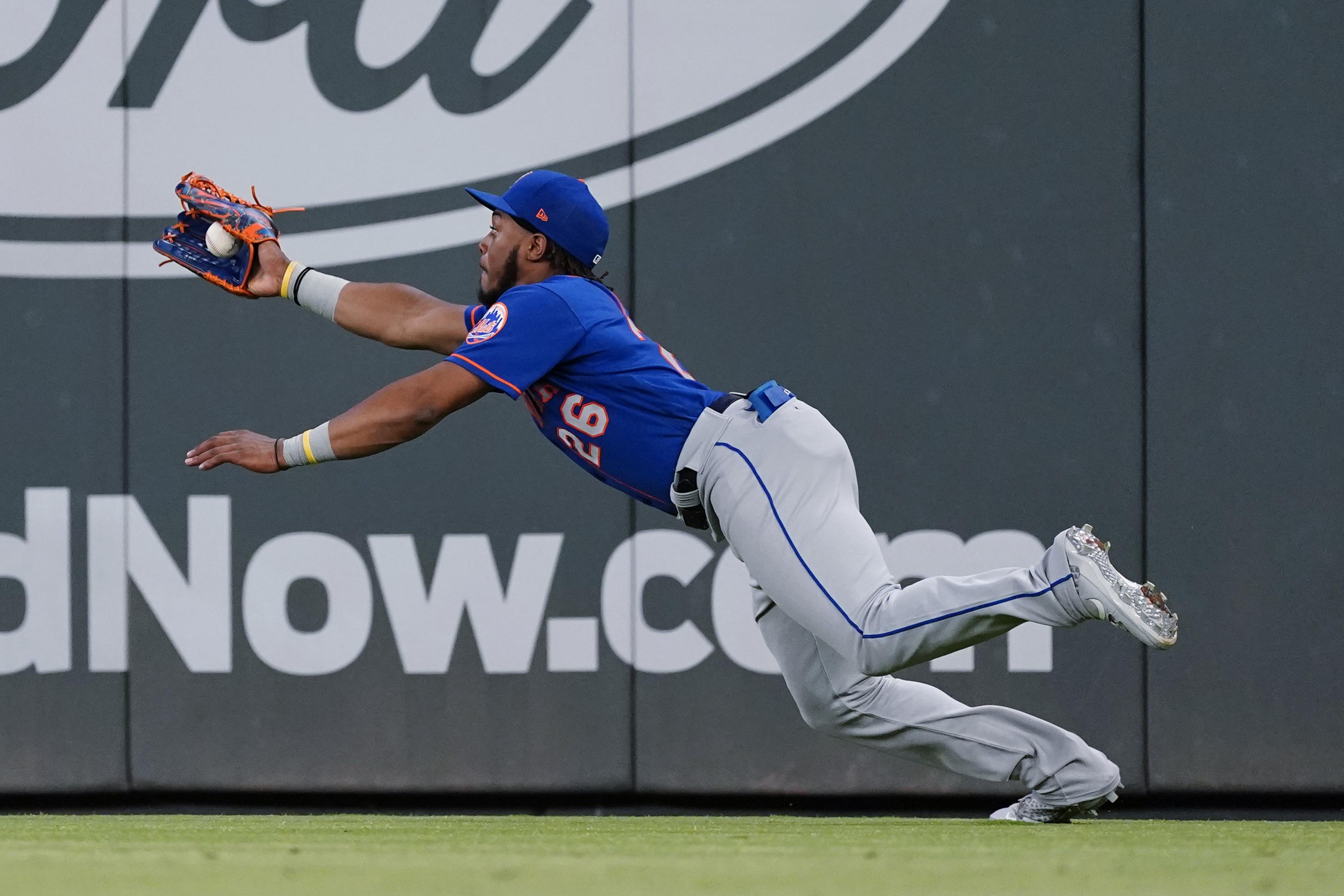 ATLANTA (AP) — Inspired by Kevin Pillar’s return to the dugout, the New York Mets got homers from Jonathan Villar and Tomás Nido, an unlikely hit from Tommy Hunter and strong performances by a string of relievers to beat the Atlanta Braves 4-3 Tuesday night.

Villar hit a two-run shot in the third inning, and Nido won it for the Mets in the ninth with a tiebreaking drive into the left-field seats off struggling Braves closer Will Smith.

One night after being struck in the face by a 95 mph fastball, Pillar brought New York’s lineup card to home plate before the game, a gesture that brought a huge sigh of relief to both teams.

With his face swollen and badly bruised, Pillar still managed a smile as he shook hands with the four umpires and Braves coach Walt Weiss, who gave him a warm pat on the shoulder.

Pillar is likely to be out for an extended period, but the injury-plagued Mets carried on just fine without him.

Austin Riley and Freddie Freeman homered for Atlanta. Marcell Ozuna tied it for the Braves with a two-out, broken-bat single in the eighth off Jeurys Familia (2-0).

But Nido pulled it out for the Mets with his second homer of the season off Smith (0-4), who had another poor outing. Edwin Diaz worked a 1-2-3 ninth for his seventh save.

Making his second career start, Atlanta rookie Tucker Davidson retired the first seven New York hitters before Hunter — the Mets batted the pitcher in the eighth spot — picked up his his first career hit by lining a clean single to left field with one out in the third,

The 34-year-old reliever had batted only four other times in a 14-year big league career spent mostly in the American League.

With everyone on the top step of the Mets dugout to applaud his accomplishment, Hunter waved in their direction, gave a little shake of the hips and fist-bumped first-base coach Tony Tarasco.

Hunter’s hit proved huge. With two outs, Villar drove a 1-1 pitch into the seats in left-center for a two-run shot.

Going with a committee approach on the mound, the Mets got one inning out of reliever Miguel Castro, who was followed by Hunter, Robert Gsellman, Trevor May, Aaron Loup, Familia and Diaz. They limited the Braves to five hits.

Mets: Minor league outfielder Pete Crow-Armstrong, New York’s first-round draft pick a year ago, will undergo surgery on his right shoulder. An MRI revealed a tear of the labrum as well as injury to the articular cartilage of the shoulder. … The Mets got a rare bit of encouraging injury news when an MRI gave RHP Taijuan Walker a clean bill of health. He was forced to leave Monday’s 3-1 win over the Braves after only three innings, but manager Luis Rojas said the issue appears to be something in Walker’s windup and delivery. The team will study video to try to determine the cause of the problem.

Braves: Davidson got the nod as the Braves audition possible replacements for RHP Huascar Ynoa, who is expected to miss at least two months with a broken right hand. Ynoa injured himself by punching the dugout bench following a poor start at Milwaukee.

The NL East rivals wrap up their three-game series Wednesday, with the Braves sending RHP Charlie Morton (2-2, 5.08 ERA) to the mound against LHP David Peterson (1-3, 4.86).