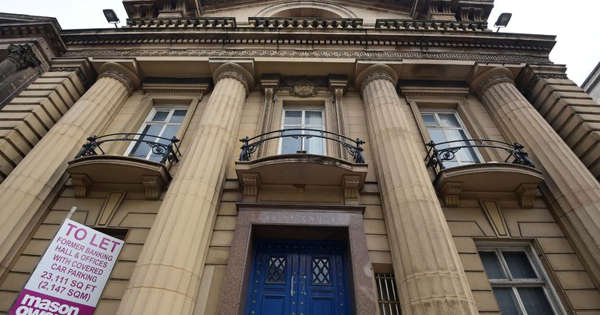 A former bank building in Liverpool city centre could be turned into a new luxury restaurant and bar, under new plans.

Plans have been submitted to Liverpool council, which could bring about a new life for The Old Bank of England building at 31 Castle Street. The building was famously occupied in 2015 by a group called Love Activists, who called for it to be used as a centre to support homeless people.

The new plans for the building come from the JSM Company Group, which has been responsible for a large number of redevelopment projects in Liverpool and Southport, as well as in Cheshire and Wales. In its planning application, the company says its planned works will create a new ‘luxury restaurant and bar’ inside the Grade 1 listed building.

The restaurant area would be created at ground and first floor level, with kitchens and other back of house facilities at the basement level. The upper floors are to be left and used as storage and office space for the restaurant.

The planning application states: “The restaurant at 31 Castle Street, The Old Bank of England building will use the existing double height banking hall, accessed through the main entrance. With a linked restaurant/bar to occupy the rear buildings previously built as a carpark to the building, although the two will be linked internally, one will be accessed via the main front entrance off Castle St and the other via a new glass entrance replacing the existing garage shutters off Cook St.”

The application does not make clear what type of restaurant or bar is planned for the building at this stage, or any specific operator to take on the project. As The Old Bank of England building is a Grade 1 listed building, only certain alterations will be permitted. The main building’s elevations are to remain unaltered, this will uphold the strong character of this iconic area of Liverpool. The additional building attached to the rear is to have a new roof and new window openings created in two elevations.


The applicant says the alterations are expected to be minimal. It says any changes will respect the listing and heritage of the building but bringing it back into use with a ‘vibrant occupancy.’

The Bank of England first opened a premises on Castle Street in 1826, helping to establish the area as Liverpool’s financial centre. The Old Bank of England building was designed by Charles Robert Cockerell and built between 1845 and 1848. It was one of three branches of the Bank of England in the mid-19th Century.

Signs have been put in place around the building, informing people of the application. The plans will now be analysed by city council planning officers and are likely to come before the council’s planning committee in due course.