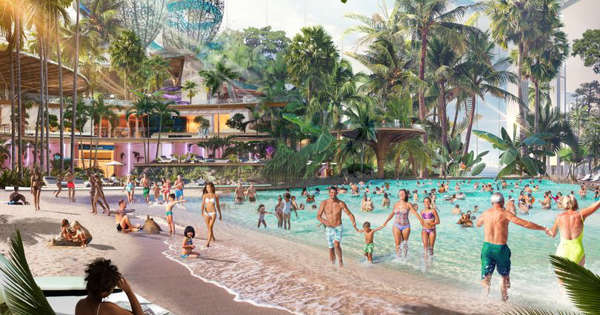 Plans for a massive £250m indoor spa, featuring beaches and swim-up bars, have been re-jigged and pushed back. Therme Group UK and developers Peel L&P unveiled plans for a site in Trafford Park, a stone’s throw from the Trafford Centre, for the massive indoor complex in 2020.

The spa, the first of its kind in the UK, was granted planning permission by Trafford council the same year. Now, the group wants to change its proposals and is set to submit new plans to Trafford council in the hope of gaining approval this summer – it’s added two years to the project’s schedule.

The new plans are set to feature ‘living’ waterslides with thousands of plants, all-season indoor beaches, multi-sensory showers, an oxygen room, a snow room and a 2.5 acre wellbeing garden. There will also be rooftop bee hives to supply the site’s restaurants and treatment spaces and 1,500 trees are set to be planted on site.

There will also be spaces for yoga, pilates and other activities as well as a number of restaurants and bars and parking on site. The site will sit between Phoenix Way, Mercury Way and the Bridgewater Canal and hopes to create “a true oasis in the city”.

Therme wants to reduce the amount of steel needed in the building’s construction so has changed its roof design too. There will also be a separate multi-storey car park nearby as part of the plans’ reshuffle.

It means the spa’s original opening date of 2023 will now instead be when building work commences and the whole space is expected to open in 2025. The group said it has redesigned the proposals to boost their sustainability credentials.


Stelian Iacob, senior vice president of Therme Group and chief executive of Therme Group UK, said: “The covid period gave us the opportunity to update the design of Therme Manchester to create an even more sustainable, engaging and accessible experience with profound health and wellbeing benefits for all.”


Trafford council’s planning department will evaluate the plans and make a decision on them once they are submitted through the usual planning process.