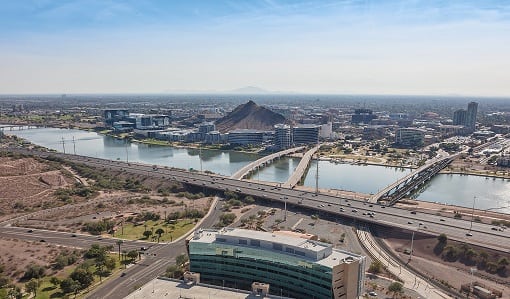 U.S. Senators Kyrsten Sinema (D-Ariz.) and John Cornyn (R-Texas) introduced the Urban Waters Federal Partnership Act—bipartisan legislation that authorizes a program led by the Environmental Protection Agency that supports the revitalization of the river corridor through the Rio Reimagined Project.

READ ALSO: The history behind the Rio Salado Project

The bipartisan legislation authorizes the Urban Waters Federal Partnership, which reconnects urban communities with their waterways by improving coordination among federal agencies and collaborating with community-led revitalization efforts to improve the nation’s water systems and promote economic, environmental, and social benefits.

The late Arizona Senator John McCain spearheaded the Rio Reimagined project in 2017 to transform and revitalize the Salt and Gila river systems. With the convening of Arizona State University (ASU) and support of the cities of Phoenix, Mesa, Tempe, Avondale, Goodyear and Buckeye as well as the Salt River Pima Maricopa Indian Community and the Gila River Indian Community, the project was officially added to the EPA’s Urban Waters Federal Partnership Program in September 2020. Through this broad collaboration, plans are advancing to identify and move projects forward that will take advantage of the metro Phoenix corridor’s rapid growth and reinvigorate communities along the banks of this 45-mile long stretch of the rivers.

“My husband worked tirelessly for Arizona, the business community and local municipalities to imagine a grand new vision for the valley’s river corridor,” said Cindy McCain, Chair of the McCain Institute. “That vision, the Rio Reimagined project, continues on today. I spoke in favor of this project’s Urban Waters Federal Partnership designation in 2020, and I applaud Senator Sinema for introducing legislation to move this forward.”

“Arizona business leaders have been fortunate to observe the high value associated with making dreams a reality, and we look forward to continuing our partnerships with other sectors that share our passion for, and commitment to, working together to realize the full potential of the Rio Reimagined vision,” said Neil Guiliano, President & CEO, Greater Phoenix Leadership (GPL) and former Mayor of Tempe. “We’re grateful for Senator Sinema’s leadership on this important project and are eager to continue our work together.”