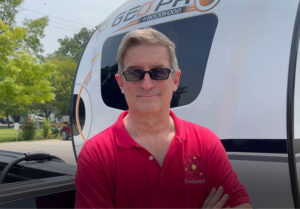 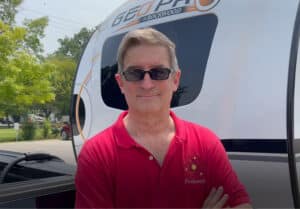 In case you missed it, EVs have been all the rage lately. Manufacturers like Ford, GM, Tesla, Volkswagen and new Wisconsin start-up Rivian plan to introduce plug-in, battery-powered vehicles by year-end; some, they claim, will be capable of towing an RV.

An electrical engineer with extensive experience in RVs, Sokol says he is in a unique position to apply his knowledge to help RV OEMs prepare for this evolving technology. He also intends to educate consumers about EV tow vehicles and sift through what he calls “all the marketing fluff.”

“Here’s why I think GoGreen RV is important for RV OEMs and dealers,” Sokol told RVBusiness when we caught up with him in the Rockwood parking lot. “I see myself as an interface between consumers and the engineers who design the new RVs. Consumers are feeding me questions like crazy – tens of thousands of questions. As an OEM, you may not get these questions otherwise. The knowledge you will gain through me will help you develop better training and better feature sets.”

Although he has just started this project, Sokol has already uncovered some valuable information. For example:

If all goes as planned, Sokol’s experiment will take him on a 6,000-mile cross-country trip starting at his home in Maryland and culminating at the Apple headquarters in Cupertino, Calif. “This tour will be part of an ongoing study of the practicality of EV towing,” says Sokol. He will gather information about how trailers affect miles per charge and the availability of charging stations along the way.

Sokol expects to get his hands on the new Ford all-electric Lightning pickup truck later this year, a GM electric Hummer and Silverado, as well as a Tesla Model Y SUV and Rivian R1t electric pick up truck.