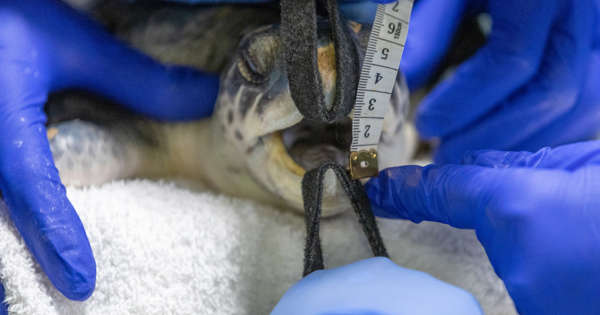 A Kemp’s ridley sea turtle that arrived at the National Aquarium unable to fully open its mouth to feed itself is on the mend after receiving acupuncture, among other innovative treatments, from the Aquarium’s Animal Health and Rescue teams.

The juvenile turtle, nicknamed Bassoon, arrived in Baltimore in November after stranding in Cape Cod, Massachusetts, along with 29 other turtles. Upon arrival to the Aquarium, Bassoon was one of the more critical patients in the group. He was less active than others and unable to open his jaw, leaving him unable to eat. Cold-stunned turtles don’t always eat during their first few weeks in rehabilitation, and after a month the team began administering IV nutrition for Bassoon so that he could get the nutrients he needed.

“While acupuncture isn’t commonly performed, we have used this treatment successfully in the past with other reptiles like snakes and lizards,” said Dr. Aimee Berliner, director of Animal Health and Welfare at the National Aquarium. “We’re so pleased to see Bassoon’s progress and look forward to the day when we can return him to his ocean home.”

Initially, Bassoon was receiving acupuncture treatments daily, but within the past few weeks, he has made enough progress that the treatments have ceased. He can now fully open his jaw and is successfully foraging on his own after weeks of tong-assisted feedings. The Aquarium’s Animal Health experts report that Bassoon is now much more alert and active than he was upon arrival.

Although he has made major improvements, Bassoon is not yet a candidate for release as he is still receiving treatments for pneumonia. While there is still a long road ahead, the National Aquarium team is optimistic that he will ultimately make a full recovery.