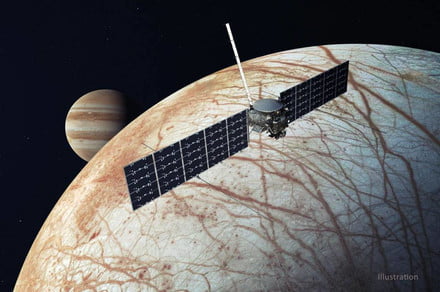 SpaceX has scored a major NASA contract that will see the commercial spaceflight company launch an orbiter to Europa, one of Jupiter’s icy moons.

SpaceX will use its Falcon Heavy rocket for the mission, which is scheduled to begin in October 2024. The contract to launch the Europa Clipper orbiter is valued at $178 million.

The mission is an exciting one for space fans on several levels. For example, it will involve SpaceX using its triple-booster Falcon Heavy — the most powerful rocket in operation today — for only the fourth time in what promises to be a spectacular launch.

It will also allow NASA to get its best look yet at Europa, providing scientists back on Earth with a slew of potentially compelling data from one of Jupiter’s most interesting moons.

When it reaches Europa in 2030, the Europa Clipper orbiter will carry out a detailed survey of the moon using sophisticated science instruments.

“Key mission objectives are to produce high-resolution images of Europa’s surface, determine its composition, look for signs of recent or ongoing geological activity, measure the thickness of the moon’s icy shell, search for subsurface lakes, and determine the depth and salinity of Europa’s ocean,” NASA said in a message announcing SpaceX’s selection.

With an internal global ocean twice the size of Earth’s oceans combined, Europa, the sixth-largest moon in our solar system, may even have the potential to harbor life. The spacecraft won’t land on the moon but instead perform flybys that will allow it to get close enough to collect meaningful data that may be able to answer this question and many others.

Up to now, scientists have been working with data from NASA’s Galileo mission more than two decades ago to learn about Europa. Before Europa Clipper’s launch, the European Space Agency is planning to launch a spacecraft to another of Jupiter’s moons, Ganymede, with the mission expected to include two flybys of Europa.

The Falcon Heavy is essentially a larger version of SpaceX’s workhorse Falcon 9 rocket. Its 5 million pounds of thrust at liftoff is equal to that generated by around eighteen 747 aircraft, providing the Falcon Heavy with enough power to carry into space a weight equal to almost 64 metric tons (141,000 pounds), or, as SpaceX describes it, “a mass greater than a 737 jetliner loaded with passengers, crew, luggage, and fuel.”

To date, SpaceX’s powerful Falcon Heavy rocket has launched three times. The first was a successful test flight in February 2018 that sent into space a Tesla Roadster belonging to SpaceX CEO Elon Musk. The payload, to be clear, was all about generating publicity for the maiden launch and another example of Musk’s fondness for doing things a little differently.

The second launch sent into orbit the Arabsat-6A communications satellite built by Lockheed Martin, while the third, in June 2019, deployed various satellites for 13 partners that included the U.S. Department of Defense.

In all three missions, SpaceX managed to land the two side boosters as planned. The core booster, however, has proved to be more challenging, crashing when it came in to land shortly after the first and third launches. On the second mission, it landed successfully on a SpaceX drone ship but exploded a short while later when it toppled over on its way back to land.

Reusability of its components is an important part of SpaceX’s setup and with the Europa Clipper mission, it will be aiming to bring all three boosters back home safely.