The oldest known gorilla in the world just turned 65 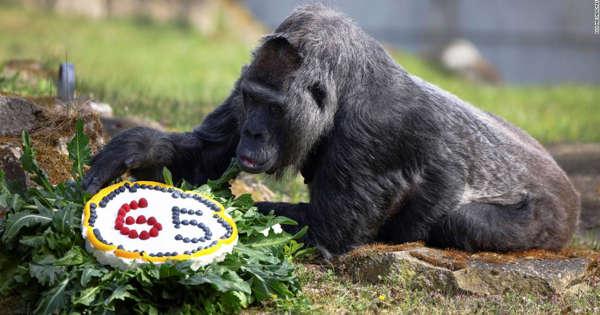 © Lisi Niesner/Reuters Fatou, the world’s oldest gorilla, receives a rice cake with fruit on her 65th birthday at the Berlin Zoo in Germany on April 13, 2022.


Fatou, a western lowland gorilla believed to be the oldest in the world, just celebrated her 65th birthday at the Berlin Zoo.

“Our Gorilla lady is celebrating her 65th birthday today, making her the oldest Gorilla in the world,” the zoo wrote on Instagram.

“The traditional birthday cake could not be missing this year either. The birthday meal is always something very special for Fatou,” the zoo said. Photos included in the post showed the huge primate enjoying a cake decorated with berries and fruits to form the numbers “65.”

Fatou arrived to Berlin in 1959 through what the zoo describes as “unusual circumstances” in a news release from her 61st birthday.

A sailor used the young gorilla to pay his tab at a tavern in Marseilles, France, after which she was transported across Europe before eventually being purchased by the zoo in Germany. She was estimated to be just two years old at the time of her arrival.

In 2019, Fatou was named the “oldest living gorilla in captivity” by Guinness World Records after Trudy, a gorilla born in 1956, died.

Fatou is one of the only animals at the Berlin Zoo born in the wild, according to the news release.

In captivity, gorillas usually live up to 50 years, Guinness noted.