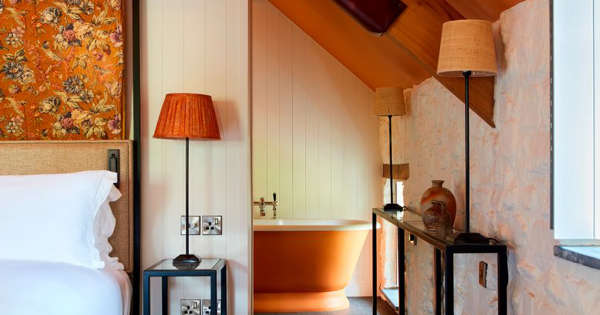 © Phil Boorman The Grove of Narberth


Two beautiful Welsh venues have been included in The Times’ list of the UK’s most stylish hotels. The newspaper has pinpointed some of the UK’s best places to stay which have been designed in various styles, fabrics and decadence, pointing out that style is in the eye of the beholder.

The two hotels from Wales included are The Grove in Narberth, Pembrokeshire and The Royston near Llanbrynmair, Powys, both complimented for their ability to mix contemporary style with the established traditional style of the original buildings. Read about more hotels and places to stay in Wales, here and for more what’s on and entertainment news sign up to our newsletter.

Topping the list is Ham Yard Hotel, London, which is in the middle of Soho and has an urban feel. There’s a holistic spa, roof terrace and theatre. Hotels from Bristol, Cornwall and Scotland also make the grade.

Read more: 21 of the most luxurious places to wake up in Wales

On The Royston, a guesthouse with seven rooms run by owners Rob and Clive, The Times writes: “A blue-grey palette, colour bursts of lime and clean-lined, white-tiled bathrooms: we’ve seen this look before, but not in the heart of the Welsh mountains, where this relaxed, seven-room guesthouse neatly mixes country and contemporary, far-reaching views and a setting that embraces ten acres of rural delight.”

The Grove in Narberth isn’t averse to being on delightfully complimentary lists with nods from AA Hospitality, who awarded it five stars last year just one of three in Wales to get the accolade. In the past decade The Grove has also scooped Pride of Britain hotel and Independent Hotelier of the year. It’s recently had a makeover during the pandemic and this stood out to The Times, clearly.

They wrote: “It’s a difficult stylistic trick, blending the old and new, but one accomplished with aplomb by the designer Martin Hulbert at this bucolic country estate in the shadow of Pembrokeshire’s Preseli Hills.” It also called their food ‘exceptional.’