Tinkle Headed To The Hall 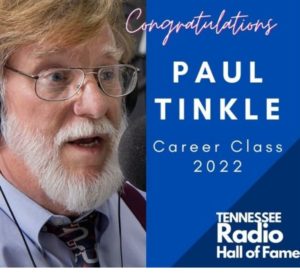 Thunderbolt Radio President and General Manager Paul Tinkle will be inducted into the Tennessee Radio Hall of Fame Saturday, August 6th at the Embassy Suites Hotel & Convention Center in Murfreesboro.

Tinkle has worked in radio almost his entire life, first as a janitor at WCMT when he was 15 years old. By graduation in 1972 he was a nighttime jock and then moved to morning drive while at UT Martin. He’s worked at WUTM-FM, WHDM AM, WALR FM, WYMC, WDXR, and WENK. He has been a DJ, news director, production director, play by play sports announcer, program director, and general manager. In 1983 he became the owner of Thunderbolt Broadcasting.