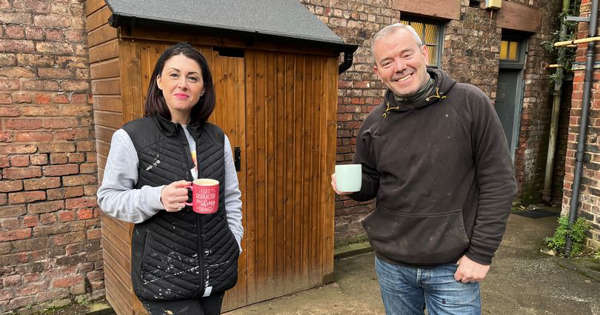 A Liverpool upcycler has been commissioned to take on a huge project transforming a city centre hotel.

Gemma Longworth, from Anfield, is an upcycler and presenter on Channel 4’s Find it, Fix it, Flog it?, who has been given the mighty project of transforming furniture in 39 rooms of The Sir Thomas Hotel in the city centre. The 38-year-old said her friend put her name forward when the hotel was calling for people who could “revamp and rebrand” the hotel without getting rid of any of the furniture – and Gemma was the perfect fit.

Speaking to the ECHO, Gemma said: “It was very lucky. I think it was about being in the right place at the right time. I think because I had been on the TV show I got a little bit of notoriety and people know who I am and what I do.

READ MORE: Dad feared puppy would be ‘ripped to shreds’ in dog attack

“It came up because my friend put me forward for this. The hotel announced they were looking for an upcycler, they wanted to revamp the rooms in the hotel and they had been closed for two years because of covid.”

Gemma added: “When I saw [the rooms] I jumped at the opportunity because the furniture in the room is really good furniture, good quality stuff. So it would just be a shame for it to go to landfill.

“As soon as I saw it, I said I have to put my stamp on that and so I am really excited.”

Gemma, who also owns an arts and crafts studio based in MerseyMade on Paradise Street said she has always been “creative” and loved arts and crafts. She said her upcycling began when she was an art student and couldn’t afford designer items.


Gemma told the ECHO : “I was always quite creative and thrifty. When I was an art student I was always one of these people who appreciated nice things but could never afford them. So it was just a case of ‘oh I will have a go and see if I can do it myself’.

“Then I was self-taught and it come to things like nice tables, nice bits and bobs of furniture and I could not afford these designer brands so I just tried my best to use my art skills to re-create them for myself and it just became something I was quite good at.

“I have my own arts and crafts studio based in MerseyMade in Liverpool city centre that’s where I work from. If I have any spare time I will take items of furniture that I find, using Bulky Bob’s or generally people get in touch with me now saying ‘I am throwing this away, do you want it?’

“I will upcycle it using my own colourful style and people can buy those from me or then it’s the case most of my work people source me and they already have their furniture and want me to upcycle it for them. It’s a little more challenging because I am working with a brief and it’s what a client wants me to do and I don’t necessarily get to put my own flair on the things, but it all pays the bills and I am very happy to be doing it.”


Gemma who calls herself the “colour queen” said the aim is to transform two to three rooms a month in the hotel and so the project will take around 12 months. The 37-year-old believes The Sir Thomas Hotel is the first of its kind to upcycle all their furniture rather than getting rid of it and it’s “brilliant” it’s happening in Liverpool.

Gemma added the tones of the furniture for the rooms will be more “neutral” then her usual style as “durability and sustainability” is one of the most important factors due to the sheer use of the furniture. Gemma added she believes there needs to be more focus on reusing as although recycling is good for the planet, it costs money to do so.

She said: “With prices soaring and going through the roof, I think trying to save money where possible is just the best thing you can do. You have got to be good to the planet of course and recycling and reusing is the best way to go.

“I have had meetings with Liverpool City Council and although everyone is talking about recycling, there needs to be a focus on reusing because recycling costs money at the end of the day, whereas reusing doesn’t. So the furniture that was already in the hotel, if they would have got rid of that.

“That would have ended up in landfill and cost so much money for it to be recycled but whereas reusing the furniture, although you have to spend money to upcycle it that existing furniture is living on.”