Where was The Bubble filmed and can fans visit the real-life locations? 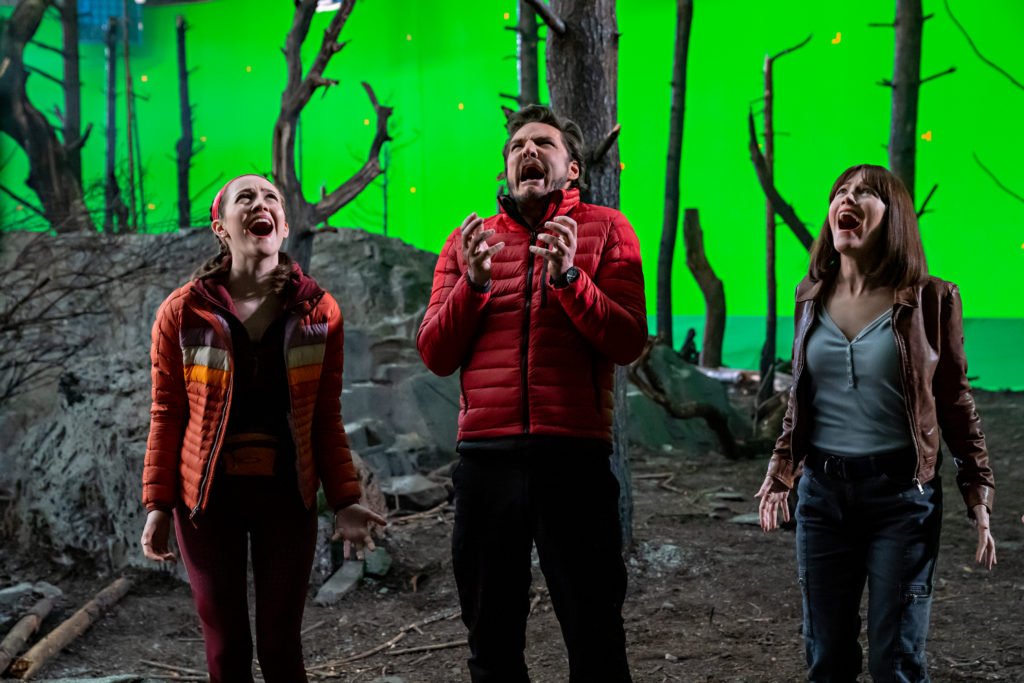 The filming locations of a movie can often make or break the final product as the difference between real-life locations and CGI sets can be huge.

In Netflix’s newest comedy, The Bubble, the movie blends both types of location for its film-within-a-film premise.

But just where was The Bubble filmed and can fans of the movie visit any of the real-life locations?

The Bubble popped its way onto Netflix on Friday, April 1st, 2022.

Directed by Judd Apatow (Anchorman, Bridesmaids), The Bubble tells the story of a group of actors who are locked together in a pandemic bubble as they attempt to film the latest entry in the Cliff Beasts franchise.

Jurassic Park meets Tropic Thunder as the film charts the chaotic production process of Cliff Beasts 6 as arguments among the cast, wayward producers and the ever-looming pandemic have everyone on the edge of a nervous breakdown.

Where was The Bubble filmed?

Filming on The Bubble took place in several locations in the United Kingdom between February 21st and April 16th, 2021, focusing on three main sites.

The first of these locations is Cliveden House which serves as the exterior for the Clifton hotel where the cast members of Cliff Beasts 6 are forced to isolate.

Located on the River Thames and on 376-acre grounds owned by Britain’s National Trust, Cliveden House’s history dates back to the 17th century and is currently used as a five-star hotel.

The location doubled as Buckingham Palace in The Beatles’ movie Help! and has further royal connections as Meghan Markle stayed there the night before her wedding to Prince Harry.

The second main location that features in The Bubble is Hedsor House, another – albeit smaller – stately home that was used as the interior of the fictional hotel.

Hedsor House is often used as a wedding and event venue and has featured as a location in several films and TV shows in years gone by including Downton Abbey, 2007’s The Golden Compass, 2015’s Legend and Richard Curtis’s The Boat that Rocked.

And finally, the last main location to feature in The Bubble is the ExCel convention centre in London.

First opened in November 2000, the venue hosts conventions, conferences and exhibition events all year round.

In The Bubble, the crew built an enormous film studio in the convention centre to create the huge green-screen film sets we see throughout the film.

Book a stay at Cliveden House

More often than not, locations in a film or TV show are usually purpose-built sets that members of the public cannot access.

However, as a functioning hotel, fans can book themselves a room at the luxurious Cliveden House, an award-winning five-star hotel that is steeped in over 350 years of history.

The Grade I-listed stately home sits within 376 acres of grounds maintained by the National Trust and comes complete with its own spa.

However, a stay at the luxurious location won’t come cheap.

For two adults to stay during the upcoming Easter weekend, the cheapest room available is the Deluxe Double Room, priced at £790 per night.

The hotel also offers a cheaper Classic Room for £670 per night but availability changes throughout the year.

For guests who want an even more lavish stay, the Prince of Wales Suite is currently available over the Easter weekend for £1,900 per night.

And lastly, the Cliveden House hotel even offers guests the chance to stay in a separate cottage, located away from the main house which will set guests back an eye-watering £4,000 per night.

The Bubble is available to stream now on Netflix after releasing on April 1st, 2022.

In other news, Is Officer K a replicant or the child in Blade Runner 2049?