Russia’s northernmost base projects its power across Arctic 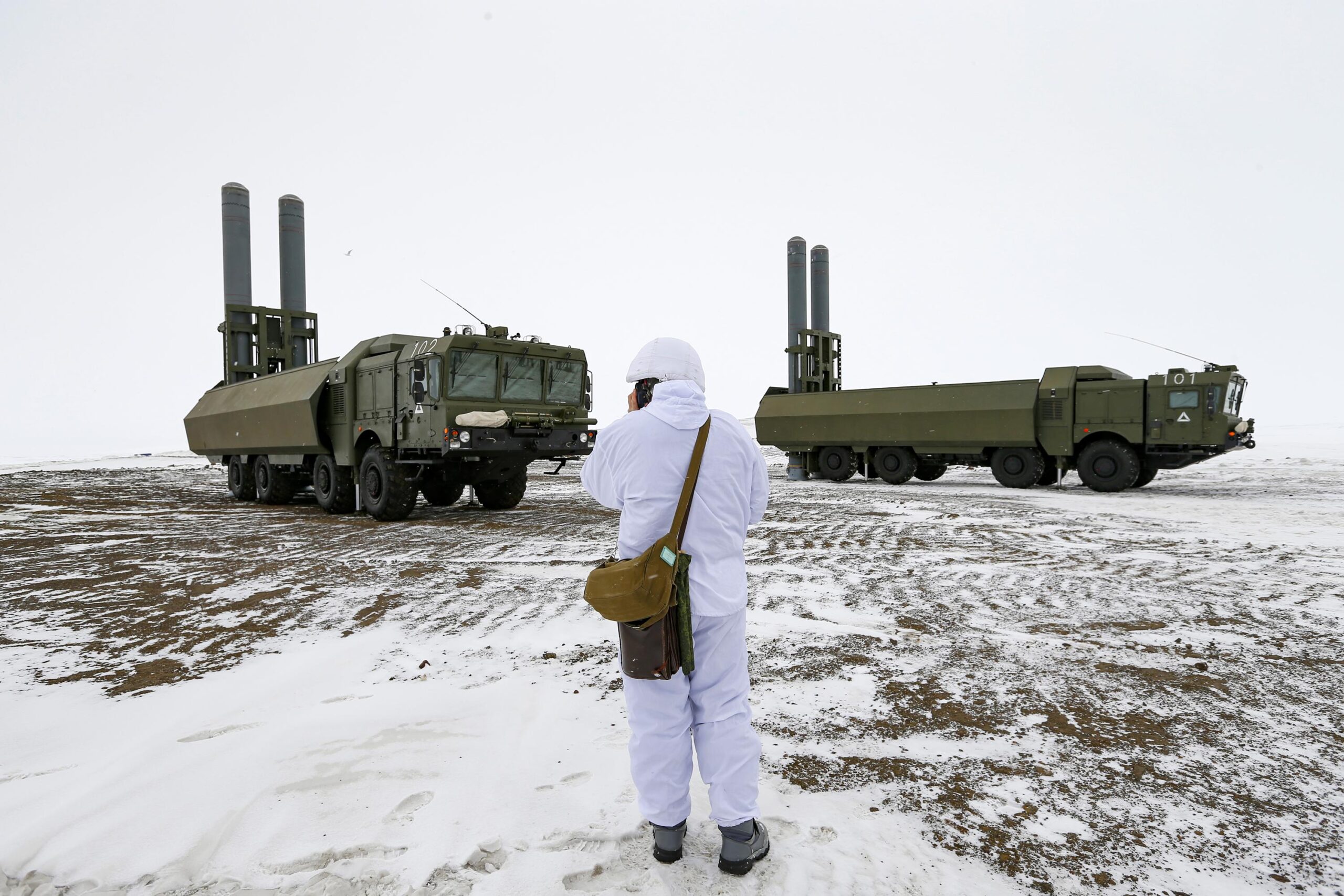 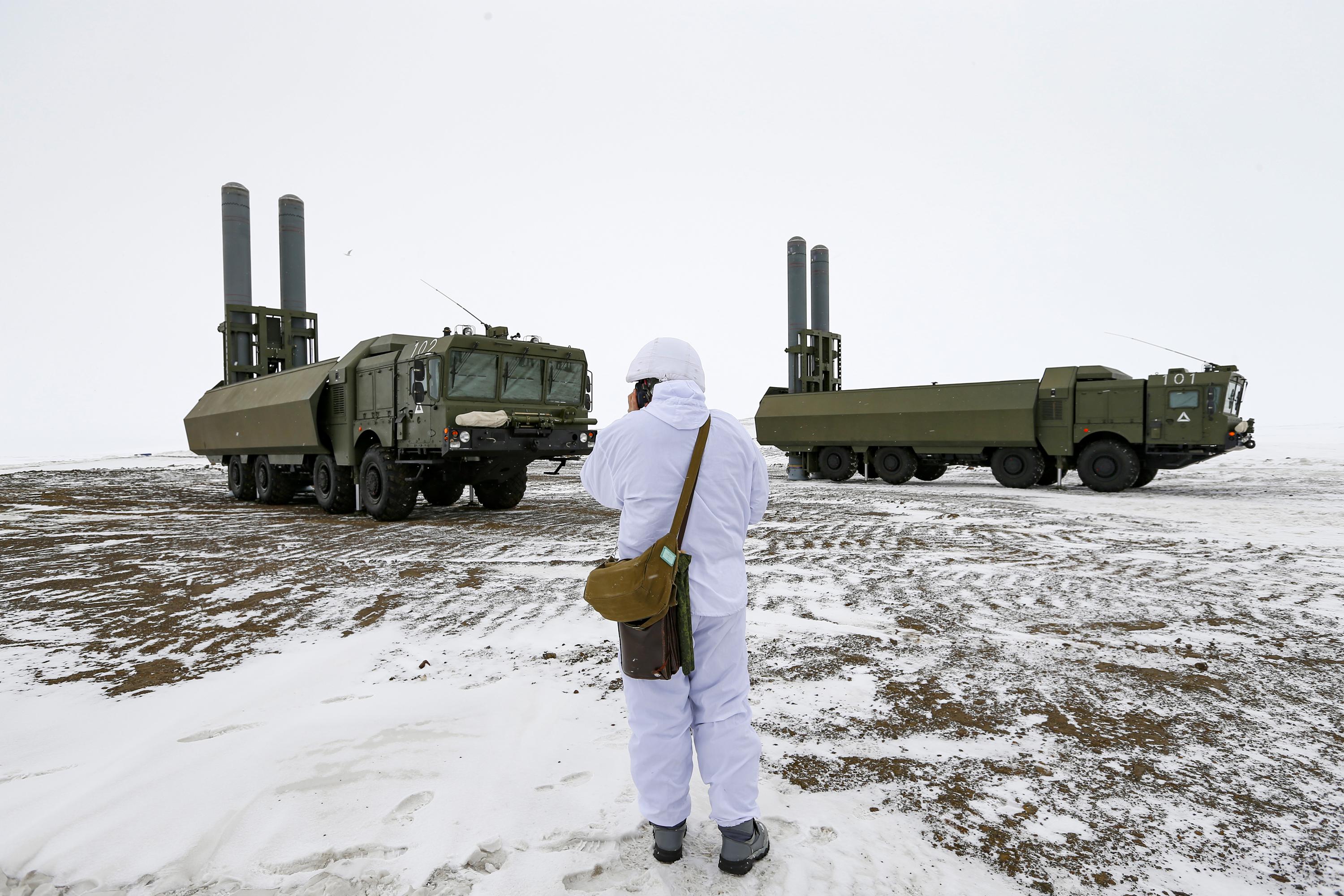 NAGURSKOYE, Russia (AP) — During the Cold War, Russia’s Nagurskoye airbase was little more than a runway, a weather station and a communications outpost in the Franz Josef Land archipelago.

It was a remote and desolate home mostly for polar bears, where temperatures plunge in winter to minus-42 Celsius (43 degrees below zero Fahrenheit) and the snow only disappears from August to mid-September.

Now, Russia’s northernmost military base is bristling with missiles and radar and its extended runway can handle all types of aircraft, including nuclear-capable strategic bombers, projecting Moscow’s power and influence across the Arctic amid intensifying international competition for the region’s vast resources.

The shamrock-shaped facility — three large pods extending from a central atrium — is called the “Arctic Trefoil” and is painted in the white-red-and-blue of the national flag, brightening the otherwise stark vantage point on the 5,600-kilometer (3,470-mile) Northern Sea Route along Russia’s Arctic coast. Other buildings on the Island, which is called Alexandra Land, are used for radar and communications, a weather station, oil storage, hangars and construction facilities.

Russia has sought to assert its influence over wide areas of the Arctic in competition with the United States, Canada, Denmark and Norway as shrinking polar ice from the warming planet offers new opportunities for resources and shipping routes. China also has shown an increasing interest in the region, believed to hold up to one-fourth of the Earth’s undiscovered oil and gas.

Tensions between Russia and the West will likely loom large over Thursday’s meeting of the Arctic nations’ foreign ministers in Reykjavik, Iceland, where Moscow is set to take a rotating chairmanship in the Arctic Council.

The base, which sits about 1,000 kilometers (600 miles) south of the geographic North Pole, was built using new construction technologies as part of Kremlin efforts to bolster the military amid spiraling tensions with the West following Russia’s 2014 annexation of Ukraine’s Crimean Peninsula.

While the U.N. pondered that claim and those from other nations, Russia has said it sees the Northern Sea Route as its “historically developed national transport corridor,” requiring authorization from Moscow for foreign vessels to navigate along it. The U.S. has dismissed Russia’s claims of jurisdiction on parts of the route as illegitimate.

Moscow has declared its intention to introduce procedures for foreign ships and assign Russian pilots for guidance along the route, which runs from Norway to Alaska.

As part of that effort, Russia has rebuilt and expanded facilities across the polar region, deploying surveillance and defensive assets. A base in the similar trefoil shape and patriotic colors to the one in Nagurskoye is on Kotelny Island, between the Laptev Sea and the East Siberian Sea on eastern end of the shipping route, also with missiles and radar.

“Practically the entire Northern Sea Route goes through Russia’s territorial waters or the country’s economic zone,” Moiseyev told reporters aboard the Peter the Great missile cruiser. “The complex ice conditions make it necessary to organize safe shipping, so Russia insists on a special regime of its use.”

NATO is increasingly worried about the growing Russian military footprint in the Arctic, and Washington sent B-1 bombers to Norway this year.

“Increased Russian presence, more Russian bases in the High North, has also triggered the need for more NATO presence, and we have increased our presence there with more naval capabilities, presence in the air, and not least, the importance of protecting transatlantic undersea cables transmitting a lot of data,” NATO Secretary-General Jens Stoltenberg said.

Moiseyev fretted about the U.S. military assets in Norway, saying it has led to an “increase of the conflict potential in the Arctic.”

The Russian Foreign Ministry last week fumed at a U.S. nuclear submarine calling at a Norwegian port, saying it reflected what it described as “Oslo’s course for the militarization of the Arctic.”

On the sidelines of this week’s Arctic Council meeting, Russian Foreign Minister Sergey Lavrov is set to hold talks with U.S. Secretary of State Antony Blinken — an encounter intended to lay the groundwork for Putin’s meeting with U.S. President Joe Biden planned for next month.

Blinken has pointed out that with the Arctic warming at twice the rate of the rest of the global average, Russia has moved to increase its presence in the region.

“Russia is exploiting this change to try to exert control over new spaces,” he said last month. “It is modernizing its bases in the Arctic and building new ones.”

Since Putin visited the Nagurskoye base in 2017, it has been strengthened and expanded. It now houses a dedicated tactical group that operates electronic surveillance, air defense assets and a battery of Bastion anti-ship missile systems.

A runway has been extended to accommodate all types of aircraft, including Tu-95 nuclear-capable strategic bombers, said Maj.-Gen. Igor Churkin, who oversees air force operations at the base.

“The modernization of Arctic airfields significantly increases the potential of the Northern Fleet’s aviation to control the airspace in the area of the Northern Sea Route and allows to ensure its security,” he said.

In March, the Russian military conducted drills at Nagurskoye with ground troops and a pair of MiG-31 fighters flying over the North Pole. The exercise also saw three nuclear submarines smash through the Arctic ice next to one another in a carefully planned show of force.

On Monday, Lavrov rebuffed Western criticism of Russia’s Arctic expansion and bristled at what he described as Norway’s push for a stronger NATO presence there.

“We hear whining about Russia expanding its military activities in the Arctic,” Lavrov said. “But everyone knows that it’s our territory, our land. We bear responsibility for the Arctic coast to be safe, and everything our country does there is fully legitimate.”