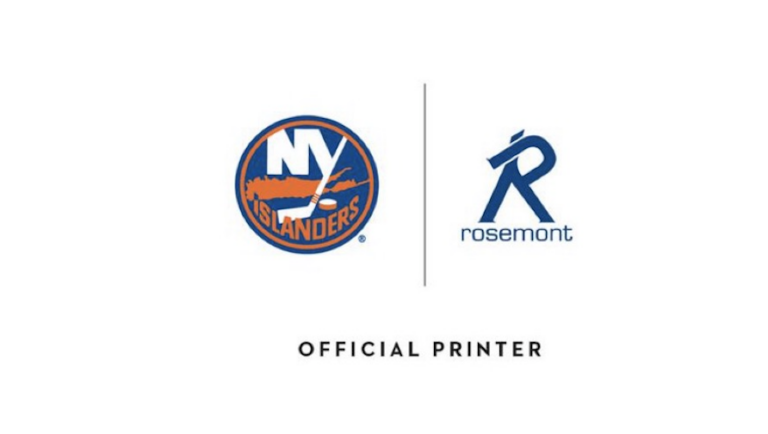 Deer Park, New York – (May 24) Rosemont Press, Inc., Long Island’s largest family-owned commercial printing company is proud to be named the Official Printing Service of the New York Islanders Hockey Club. The multi-year sponsorship provides Rosemont with a platform to showcase its range of production capabilities, from the dasher boards and tarps seen on home television broadcasts to large-format and promotional signage in both the Nassau Coliseum and the Islanders’ much anticipated new home, UBS Arena at Belmont Park.

The two organizations have grown up together on Long Island with Rosemont’s formation preceding the Islanders by only 10 years. “As a local company, we are especially excited to partner with our homegrown heroes and to be the creator of the visual communications Islanders fans see in the Coliseum, UBS Arena and beyond. We are so proud to be associated with a team that shares our values of hard work, professionalism and dedication to its craft,” said Patricia Reardon, President of Rosemont. “We are also big Islanders fans. Our father, the founder of Rosemont, used to take us to see the Islanders when we were kids.”

“Rosemont is synonymous with efficiency and commitment. We’re thrilled to partner with this family-owned business that shares our deep roots on Long Island,” said Bryan Calka, Senior Vice President of Partnerships for the Islanders.

As Rosemont supports the Islanders’ expansion to the state-of-the-art UBS Arena in the fall, it is also extending its own service offerings beyond commercial printing. Michael Reardon, principal of Rosemont, said, “For years, we have been quietly offering a variety of marketing communications solutions including branded promotional items, comprehensive warehousing and fulfillment for our clients, website design and development, and even the production of special events. This partnership symbolizes a springboard for Rosemont to reposition ourselves as a full-service production house.”

Rosemont is a woman-owned, Long Island-based company providing full-service printing and visual communications products to premier brands and clients worldwide. It was founded and has been continually run by the Reardon family since 1962. Rosemont’s headquarters and 40,000 square foot production facility are located in Deer Park, Long Island, NY. Rosemont is certified by the Forest Stewardship Council®, which is a designation of environmental and social responsibility earned after a rigorous application and auditing process.

About the New York Islanders

Founded in 1972, the New York Islanders Hockey Club is the proud winner of four Stanley Cup Championships and nineteen consecutive playoff series victories. The Islanders have had nine members inducted into the Hockey Hall of Fame and play in the National Hockey League’s Eastern Conference.

The Islanders Children’s Foundation has helped countless youngsters in need around the world since its inception. Donations are raised through the efforts of our players, management and employees, along with our fans and partners.

UBS Arena at Belmont Park is finishing construction and will be the team’s new, state of the art home starting with the 2021-22 NHL season.