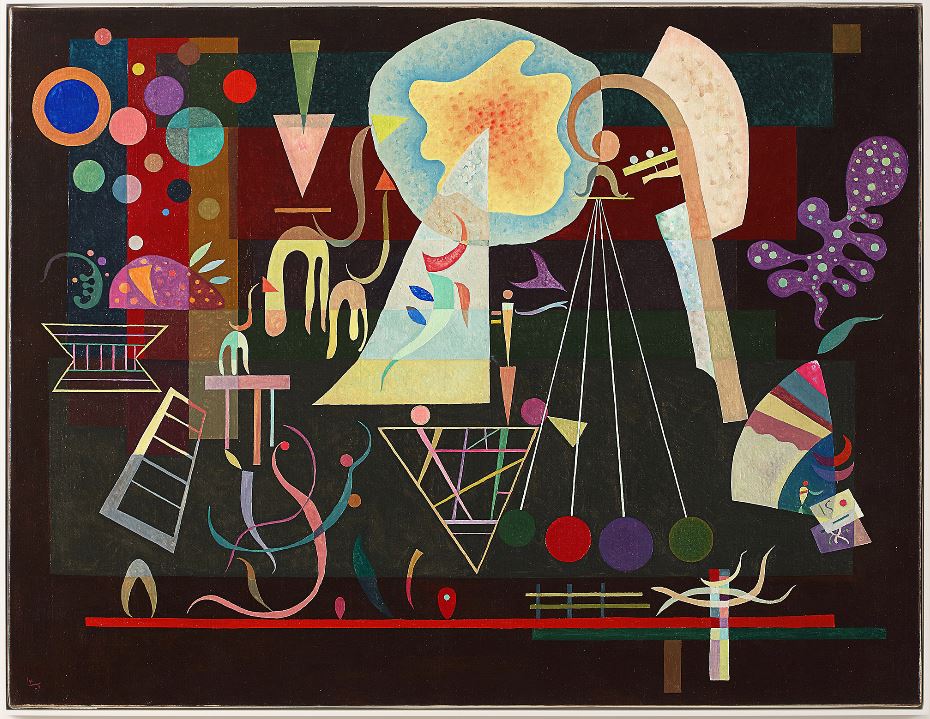 Unseen in Public for Over Half a Century, Wassily Kandinsky’s Exquisite Tensions calmées Will be Exhibited in Sotheby’s Gallery in the DIFC on 17 & 18 May.

Originally in the Collection of Friend & Supporter of the Artist Solomon R. Guggenheim Bought for his Eponymous Museum in 1945
Star Lot of Auction at Sotheby’s London on 29 June

“Wassily Kandinsky was a true pioneer, changing the course of art history around the world. Exhibiting this stunning painting by the artist in the UAE, before it travels to London as the star of the auction season in the capital, is part of our long-standing commitment to bringing the best to the region. It is all the more exciting to be showing this museum-quality work at the same time as the Louvre Abu Dhabi’s wonderful exhibition on Abstraction and Calligraphy. The incredibly rich, jewel-like painting is the perfect complement to the exploration of the universal language of abstract art that has continued to flourish not just in the West but also at our very own doorstep.”

No artist played a greater role in the development and emergence of abstraction than Wassily Kandinsky. This modern masterpiece from 1937 is an example of the artist’s extraordinary vision which continues to have a profound influence on generations of artists that have followed. Tensions calmées encapsulates Kandinsky’s legacy as the father of abstraction and an influential figure both in the rise of Abstract Expressionism in the 1940s and Contemporary art to this day.

Tensions calmées was last offered at auction almost fifty years ago and has remained in the same family collection, unseen by the public, ever since. It will go on exhibition at Sotheby’s Dubai gallery in the heart of the Dubai International Financial Centre on 17 and 18 May. It will then be offered at auction at Sotheby’s London with an estimate of $25-35 million, as part of the livestreamed Modern & Contemporary Evening Sale in London on 29 June.

Painted in 1937, this painting illustrates an important chapter in the history of twentieth-century art and reveals Kandinsky at the height of his powers. In 1933, Kandinsky moved to Paris and the complex abstraction compositions he painted in the city during the 1930s – Tensions calmées chief amongst them – are considered the culmination of his artistic ideals.

Taking his cue from musical composition, Kandinsky determined that every colour corresponded with a particular emotion or ‘sound’. The imagery of Tensions calmées evokes the elegant clefs, notes and bars of sheet music whilst a curved arabesque reminiscent of a violin scroll emerges in the right of the composition. The musicality of the painting is borne of the artist’s orchestration of the composition as a whole, resulting in a symphonic majesty in which the many visual elements are brought together in harmony.

The work once belonged to the artist’s friend and world-renowned collector Solomon R. Guggenheim, famous for his eponymous museum in New York. In the course of a friendship that was to last a lifetime, Guggenheim acquired no fewer than 150 works by the artist. This painting was sold from his collection at Sotheby’s in 1964 in a landmark auction of 50 paintings by the artist, which offered most collectors their first opportunity to acquire a major work by the artist – before this, the vast majority of his works could only be seen in museums in Russia, the Städtische Galerie im Lenbachhaus in Munich and in the collection of the artist’s widow, Nina Kandinsky.

The view will take place at Level B2, Gate Village Building 3, Dubai International Financial Centre, UAE on 17 and 18 May from 10am – 7pm.

Located in the heart of the DIFC, Sotheby’s Dubai presents a vibrant, ever-evolving programme of year-round events, including selling and non-selling exhibitions, events and talks, watches and jewellery valuations – reflecting the spectrum of Sotheby’s international sales and extensive client services.

Recent exhibitions have showcased museum-quality artworks, including a portrait by the Renaissance painter Botticelli that went on to sell at Sotheby’s in New York for $92 million and a royal pearl and diamond pendant that belonged to Marie Antoinette that sold for over $36 million at Sotheby’s in Geneva.