SEOUL, SOUTH KOREA – Media OutReach – 24 May 2021 – BTS fans ‘ARMY’ are loving BTS’ new single, ‘Butter’, and are showing their passion on Twitter, where fans Tweeted about ‘Butter’ over 31 million times worldwide on launch day, and more than 300 million Tweets in a month leading up to the single’s release. ‘Butter’ was released on May 21st at midnight ET, followed by a world premiere performance on May 23rd at 8pm ET at the 2021 Billboard Music Awards (BBMAs).

The most tweeted time was from midnight to 1AM ET on May 21st when ‘Butter’ was released, with 5 million tweets per hour.

Prior to the release of ‘Butter’, Twitter launched special emojis for BTS’s fans around the world to share their excitement for the single’s launch. Each emoji could be added to Tweets using the hashtags

#BTS_Butter with Butter logo, as well as

#SmoothLikeButter, with a melting butter image reflecting the lyrics, and

#Got_ARMY_Behind_Us, to show BTS’s love towards ARMY, following the single’s release on May 21st.

@BTS_twt. Following the release of ‘Butter’, BTS won the ‘Top Social Artist Award’, ‘Top Duo/Group’, ‘Top Selling Song’, and ‘Top Song Sales Artist’ at the Billboard Music Awards (BBMAs) held on May 24th. Of note, BTS won the ‘Top Social Artist Award’ for the fifth consecutive year. During the BBMAs, BTS also performed ‘Butter’ and expressed their gratitude to fans around the world. During the three hours from 2pm to 5pm ET when the BBMAs were held, fans worldwide sent over 14.4 million Tweets related to BTS. 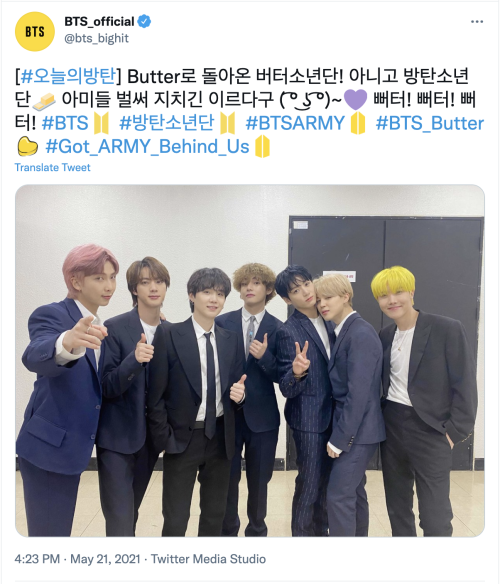 Fans in countries including South Korea, the United States, Indonesia, Brazil, Japan, the Philippines, Mexico, Thailand, India, and Peru were among the most vocal in their anticipation for and celebration of ‘Butter’ on Twitter, driving the most conversations. Fans across the world used the following hashtags to talk about ‘Butter’ and share their excitement:

#BTSARMY is very passionate and well-known for their love for new BTS releases, and ‘Butter’ showed their fans reaching new heights in celebrating their favorite artists. From sharing their anticipation for the new single, to sharing their reactions as it happened, to commemorating the sights and sounds of the music video starting right after the release, BTS’ fans shared all of this together via Twitter. Twitter will continue to support BTS and ARMY staying connected through public conversations worldwide without any barriers.”

K-pop fans are finding more ways to stay informed about their favorite artists by using Twitter Topics. Topics are another way to see the most interesting and relevant content about the things that they care about, whether it is BTS, BLACKPINK, NCT, SEVENTEEN, ITZY or any of their other favorite K-pop artists. Music fans can join the conversations about

#KpopTwitter right now to get real-time updates about their favorite K-pop artists and more.