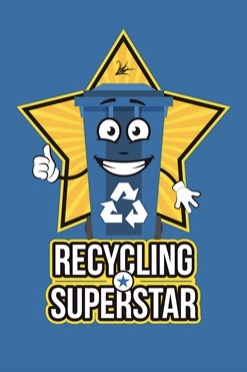 The City of Lakeland’s Division of Solid Waste is starting a new program where a Recycling Superstar will be named each quarter. Starting later this month, recycling truck drivers will get together to identify a specific household on their route that does everything right with their recycling. Gene Ginn, Manager of Solid Waste, said, “We will name our first Recycling Superstar at the end of the month. This is a great way to celebrate those Lakeland households who flatten their cardboard boxes, remove all plastic bags from their recyclables, space their carts three feet apart, and only load their carts with acceptable materials.”

Since 2018, City of Lakeland solid waste customers have improved their recycling habits by reducing the amount of non-recyclable materials placed in their cart. In 2018, 20.5% of all collected materials happened to be non-recyclable. That number this past year dropped to 11.1%. Ginn said, “After an extensive outreach program, our customers are better-educated on what they can place in their recycling bins. Ultimately, we would like that number to drop even further and have zero contaminated, non-recyclable materials placed in the blue carts.”

The City of Lakeland collected approximately 7,000 tons of recyclable materials in 2020. This material is not going to the landfill, which saves in fees, and is better for our environment. According to a recent study done by the University of Colorado, the US produces enough trash each year to create a pile of garbage that would cover 1,000 acres and be over 400 feet tall. This past year, the 331 million people living in the United States generated about 3.5 pounds of trash each day, creating 18,433,779,281 cubic feet of waste. It is estimated that 80% of all items buried in landfills could be recycled.