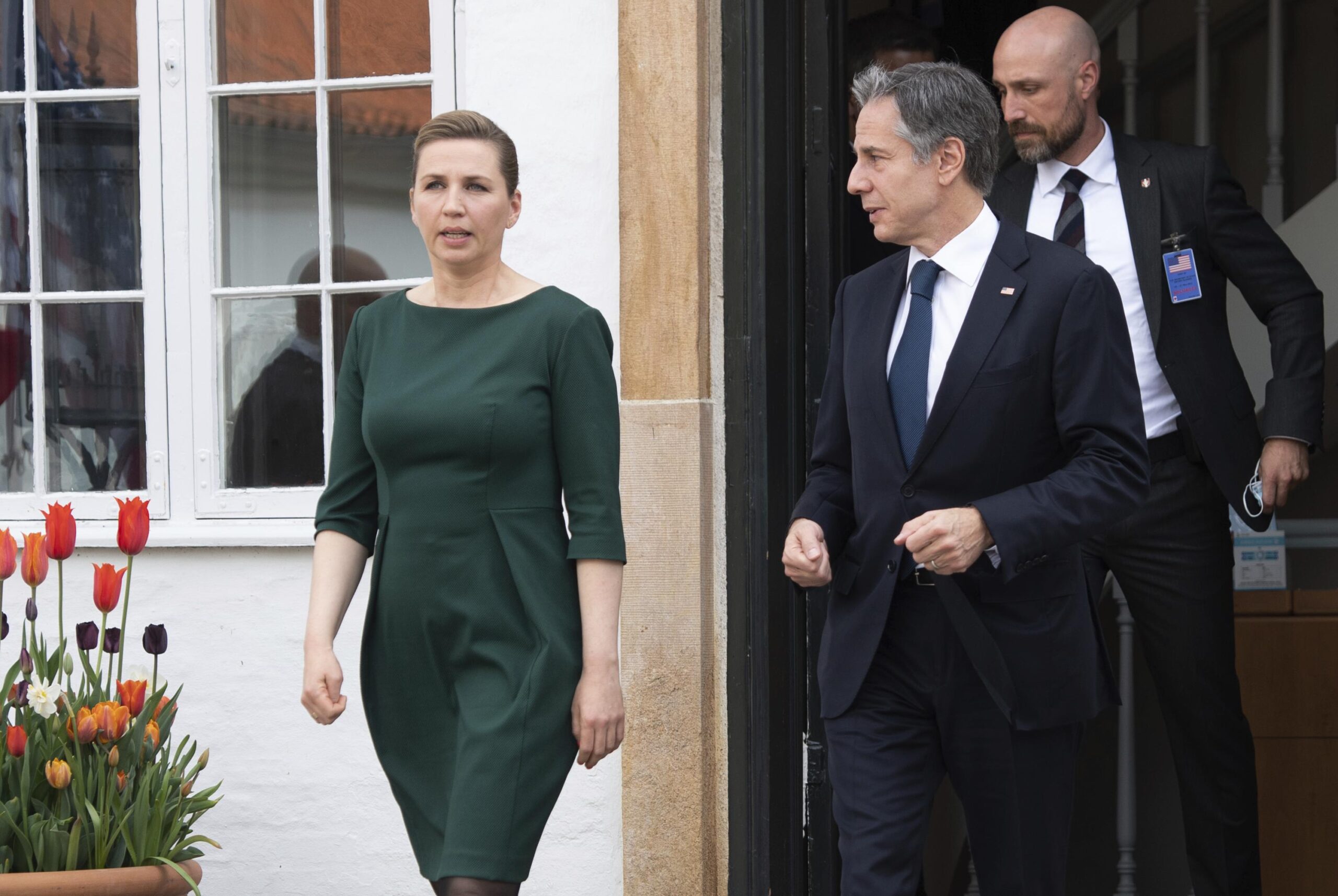 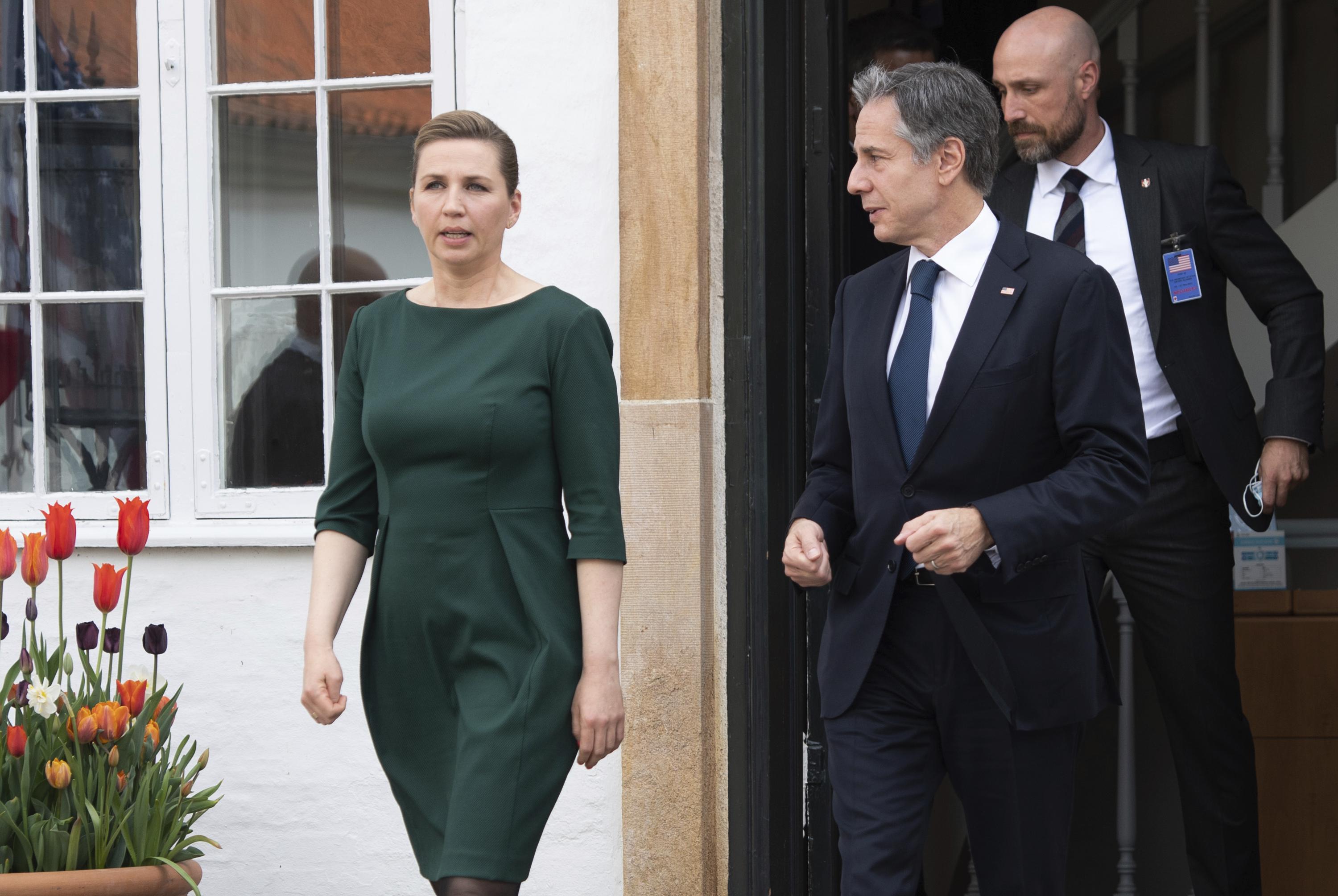 As calls in Washington and around the world grew for the Biden administration to take a tougher, more active stance on increasing Israeli-Palestinian violence, Blinken largely held to his initial agenda in meetings with Danish leaders and officials from Greenland and the Faeroe Islands. He cancelled only one scheduled event to make calls on the Israeli-Palestinian situation.

Blinken’s talks in Copenhagen came ahead of his first face-to-face encounter with Russian Foreign Minister Sergey Lavrov at a time of significantly heightened tensions between Washington and Moscow. That meeting is set for Wednesday in Iceland on the sidelines of a meeting of the Arctic Council. It will set the stage for a planned summit next month between President Joe Biden and Russian leader Vladimir Putin.

While the deteriorating situation in the Middle East cast a shadow over his trip, Blinken brought a message of renewed U.S. cooperation to Denmark. Denmark was one of several European countries that felt slighted by former President Donald Trump and expressed clear relief at the change in administrations.

“Today America is back, and in more ways than one,” said Danish Foreign Minister Jeppe Kofod. “And, let me tell you, America has been missed.”

At a joint news conference with Blinken, Kofod rattled off a litany issues on which the Biden administration has reversed course from the Trump era to Denmark’s delight. Those included rejoining the Paris climate accord and World Health Organization and re-engaging with the UN Human Rights Council and the World Trade Organization.

Kofod had met less than a year ago with Blinken’s predecessor, Mike Pompeo, amid lingering mistrust created by Trump’s desire to buy the Danish territory of Greenland and his cancellation of a state visit to Denmark in 2019 after his suggestions were flatly rejected.

“I am resolutely focused on today and tomorrow, not yesterday,” Blinken said, adding that the United States would pursue “new partnerships” with Denmark and other countries on climate change and work more closely with like-minded nations to confront threats posed by an increasingly assertive Russia and China.

But, he said that: “Across the board, I think you’ve seen a few short months a determination by the United States to reinvigorate its alliances and partnerships and also our engagement with international institutions.” And, he appealed for Europeans to embrace the Biden administration’s policy shifts. “Judge us not by what we say, but by what we do,” Blinken said.

Climate change dominated the discussions. The Biden administration is seeking to restore U.S. credibility with allies on the topic after four years during which the Trump administration either downplayed the threat posed by climate change or urged other nations to take advantage of the commercial possibilities resulting from a loss of sea ice and melting glaciers.

“It’s a different approach,” Frederiksen told reporters. “That means a desire for cooperation around the Arctic region, where changes are taking place.”

In a statement, the State Department said Blinken “had emphasized the importance of advancing our mutual goals of combating the climate crisis, developing green technology, and continuing common efforts with the Kingdom of Denmark on the Arctic.”

Former President Donald Trump had also created a stir when he proposed purchasing Greenland from Denmark, an offer roundly rejected by both. Trump then canceled a scheduled state visit to Denmark in 2019, creating more ill feelings.

A senior U.S. official said Blinken hoped to get beyond any lingering doubts on Greenland by highlighting “all of the things that we’re doing with Greenland as a part of the Kingdom of Denmark.”