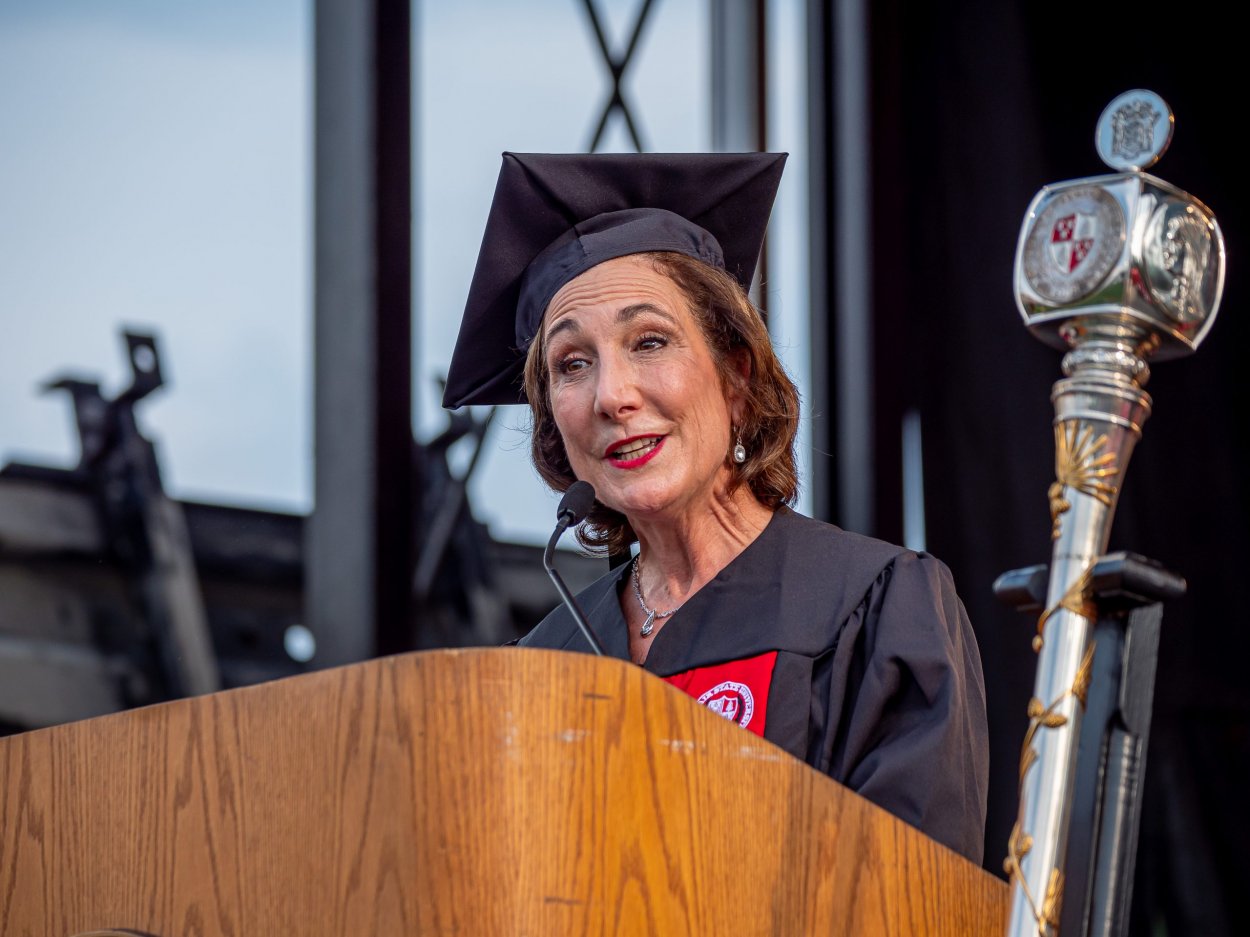 It was a milestone long delayed for Feliciano who has credited the University with providing the foundation for her successful career even though she did not complete her degree when she attended decades ago.

In conferring the honor, President Susan A. Cole told Feliciano, “You have achieved distinction in your career as a successful entrepreneur and business leader, and have made outstanding contributions to Montclair State University and to the business community of New Jersey.”

Feliciano is the Chief Executive Officer of FEM Real Estate, which she co-founded with her husband, Edwin Feliciano after serving as the Chief Executive Officer of Lincoln Park Healthcare. Feliciano has been named to ROI-NJ’s Influencer: Women in Business 2021 list and NJBIZ’s Top 50 Power List, and has been named a New Jersey Business Hall of Fame Laureate, and received the University’s Carpe Diem Award in 2012.

“Your generosity and commitment have left their mark on the University in many ways, including the Mimi and Edwin Feliciano School of Business, the Feliciano Center for Entrepreneurship & Innovation, and The Global Center on Human Trafficking,” said Cole. “You continue to support the University and its students by serving on the advisory boards of the Center for Entrepreneurship & Innovation and School of Business, and even by teaching master ballroom dance classes in the College of the Arts.”

Cole’s remarks then turned more personal: “Mimi, today, many years since you first came to Montclair State as a freshman, I am proud to say that you are earning your degree.”

“With the many hundreds graduating today, you now become an alumna of Montclair State University, and we are proud to call you one of our own.”

During her remarks, Feliciano shared a story of her early days at Montclair State, fresh out of high school with her only business experience being that of working on her father’s books in the family construction business.

As a first generation student, Feliciano said two things dominated her thinking: “I felt like I wasn’t good enough and that I never had enough money.” She recalled a story in an accounting class where the professor chastised her when she protested that her father’s checkbooks were always overdrawn and his business was successful. She went home and promptly informed her father that, per her professor, he was bankrupt.

“He was a true entrepreneur. He had a big vision and he always believed in growing the business,” said Feliciano.

Feliciano’s father told her: “You know, Mimi, you’ve got to believe in yourself.”

“Today, my name is on the School of Business,” Felicano proclaimed, “and it’s in reach for you too. Believe in yourself and don’t sweat it if you’re a little short on cash.”

The ceremony also held significance as Feliciano’s friend and fellow supporter of the University Michele Ansbacher was awarded with the Distinguished Alumna Award for the Feliciano School of Business.

“Congrats to my friend, Mimi, who I met through our work on the Advisory Board. I’m struck by the fact that two Jersey girls from Nutley and Belleville are sharing the stage today,” Ansbacher said in her address. Then to students, she said, “I congratulate each of you on your achievement. Your diploma represents the courage, character and sacrifice you needed to be sitting here today.”

The ceremony was one of three for the Feliciano School of Business and one of 18 ceremonies held by Montclair State in an effort to have safe outdoor ceremonies during the pandemic.