How and when will Cardano (ADA) Get Smart Contracts? In less than 90 days 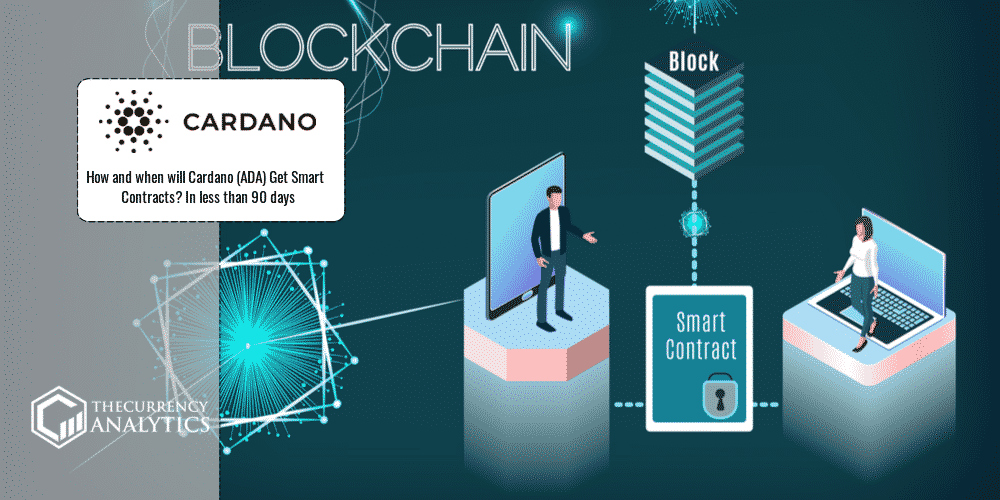 Per the Lex Fridman, Interview, when asked how and when Cardano (ADA) will get Smart Contracts?

Charles Hoskinson expressed:  “It took us a long time to get here and we will be there in the next 90 days.”

Like everything we do there was a process and all the colors of the rainbow.  We started with Alonzo blue, and then white and purple. And in each step you do some more thing if you bring more users in. And, then eventually you get to a threshold where you say okay everything works the way it is intended and you push the button.

We initiate with Cohort for the communicator event and boom the system has smart contracts. And you just wake up and it is there, like it is in your house. It is like when I get my blue check mark on my twitter I woke up and I had it.

Lex Fridman:  And you can never go back on it.  You can’t go back it is a hard fork.  Yeah Exactly.  I think you can take it away.

Charles Hoskinson:  Yeah I can take my check mark away, but there will be like a hard fork back.

Lex Fridman:  So, currently there is a testing procedure going on and what does that look like? And, what will give you confidence that things are working well.  First you start with the Mary Era, we are right now multi asset so, you can do meta-data and issue tokens on Cardano, but you would have limited programmability on chain.

Alonzo Adds the programmability, we already have most of the foundations in the extended UTXO model and those smart contract models and those things aren’t ready.

So, the first step is they fork it. So, all that is rules and all there.  That is what we did with Alonzo blue.  We forked a testnet base layer. And it successfully survived going from Mary to Alonzo.

Which means that you can move transactions from one side to the other – both systems work.  And, then the next step is to enable the infrastructure able to run this testnet just like they are running Cardano. And, that is what we are doing right now. Bring all these SPOs (Stake Pool Operators) then I will be able to submit and run smart contracts on the system and it actually a turn-around trip, you send something you get something back.  So, that is where we are at.

What you do is each step, you go from like 50 people to several hundred and then purpose an open testnet where we want every single person in the entire ecosystem to use it.  It also is indefinite.

So that people are writing with Plutus playground and local interpreters, their smart contracts could actually start testing them now on the public infrastructure. So, it is kind of releasing something like Def kits or X box or something like. You send them again to developers before you release the Xbox so they can test their video games in anticipation of the release of the system.