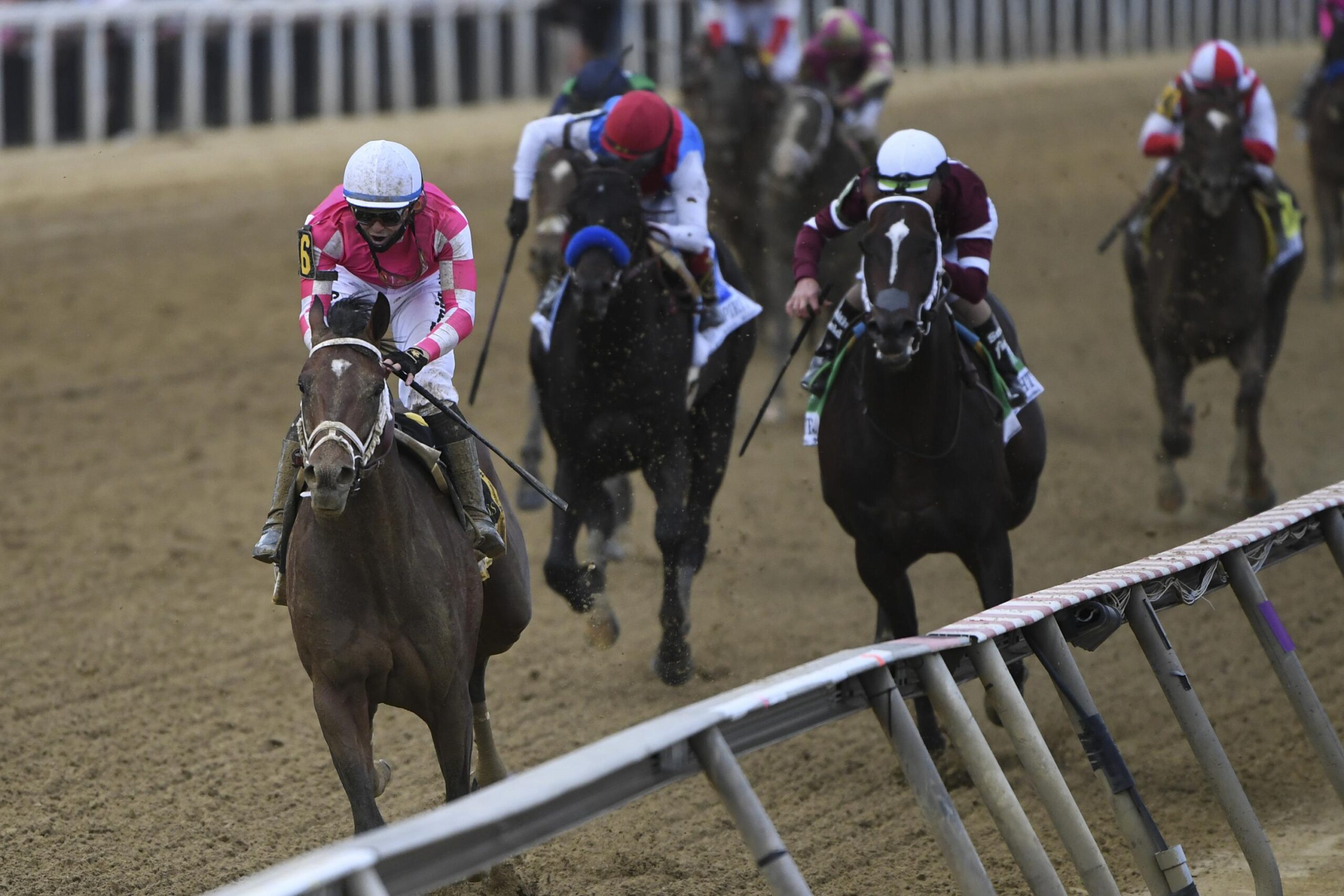 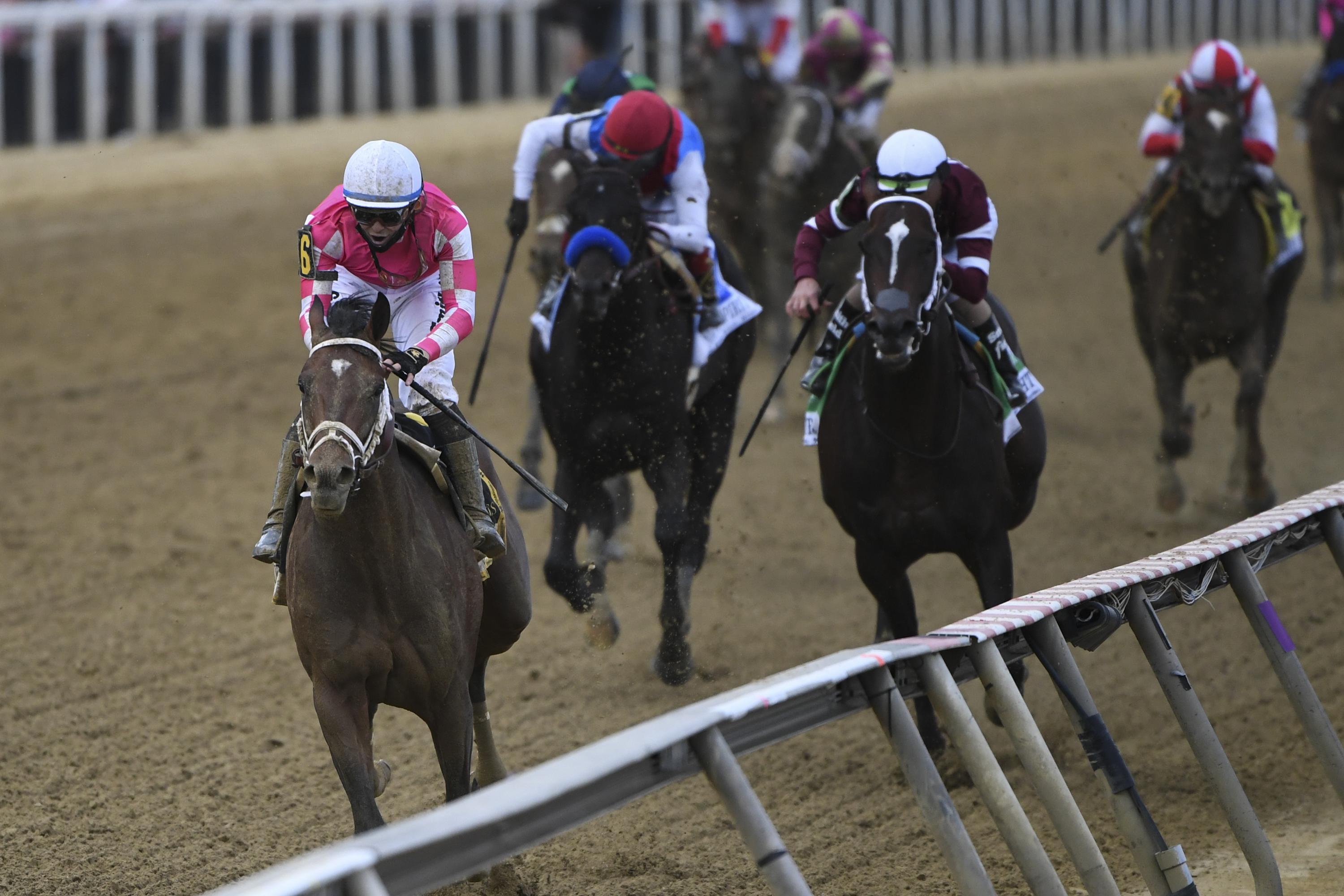 Little-known Rombauer sprung an 11-1 upset to win the Preakness on Saturday, passing Bob Baffert’s Kentucky Derby winner to end a potential Triple Crown bid that would have carried a giant asterisk.

Medina Spirit finished third and will not go on to the Belmont with a Triple Crown on the line and a potential Derby disqualification hanging over the sport.

“A little disappointed, but we’ll go on from here,” said assistant trainer Jimmy Barnes, who saddled the horses in Baffert’s absence.

Baffert was not present at Pimlico Race Course, opting to stay away because of the controversy surrounding Medina Spirit, who tested positive for the steroid betamethasone in post-Derby testing. He said in a spotlight-stealing statement hours before the race: “Today is not about Bob Baffert. Instead it is about Medina Spirit and all of the other equine athletes in our tremendous sport.”

All the focus nonetheless was on 2-1 favorite Medina Spirit, Baffert and his other Preakness runner, Concert Tour, who went off at 4-1. Medina Spirit was passed for the first time in his career by Rombauer, who won by 3 1/2 lengths over second-place Midnight Bourbon.

“I had to come out running to get my position,” said Medina Spirit jockey John Velazquez, who fell to 0 for 11 in the Preakness. “I knew that he was going to be pressed today. I was hoping that he wouldn’t overdo it, and we did.”

Concert Tour was a disappointing ninth in a 10-horse field.

“I am at a loss for words,” said Concert Tour jockey Mike Smith, who left Midnight Bourbon after the Derby to ride Baffert’s other Preakness horse. “He just wasn’t going anywhere.”

Maryland racing officials required Concert Tour and Medina Spirit to undergo additional testing and monitoring as conditions to run in the Preakness. Those three rounds of tests came back Friday, clearing them to race. None of the other horses were subject to that level of scrutiny, which came out of the situation at Churchill Downs and Baffert’s four other medication violations over the past 13 months with other horses.

“He broke as expected and I thought he put enough pressure on Medina Spirit to make it a horse race and then he ended up second,” Midnight Bourbon trainer Steve Asmussen said. “He showed up. He’s improving. And he’s not there yet, all at the same time.”

Midnight Bourbon was sixth in the Kentucky Derby behind Medina Spirit, whose victory still hangs in the balance with a second test yet to be analyzed. It’s unclear how long that will take.

Trainer Michael McCarthy won a Triple Crown race for the first time and captured the Preakness before Hall of Famer Todd Pletcher, for whom he worked as an assistant before opening his own barn. Pletcher gave McCarthy a bear hug after the race.

Rombauer is owned by John and Diane Fradkin, a far cry from Medina Spirit’s Zedan Racing Stables and other horse racing conglomerates. He won for the third time in seven starts.

McCarthy choked back tears while talking about everyone involved with Rombauer.

“Means a lot to be here, participate on a day like this,” he said. “Happy for the Fradkins. Just goes to show you that small players in the game can be successful, as well.”

Rombauer busted the bias of horses hugging the rail on the dirt at Pimlico Race Course all day, going past Midnight Bourbon and Medina Spirit down the stretch and winning by 3 1/2 lengths.

Jockey Flavien Prat won the Preakness two years after being elevated to the Derby winner aboard Country House when Maximum Security was disqualified.

“Of course it’s a lot different when you cross the wire first: You get that feeling,” Prat said. “It’s a lot of joy.”

With the usual joy replaced by chatter about Baffert and medication violations, the Preakness was run in front of a limited capacity of 10,000 fans, a fraction of the crowd of 100,000-plus that typically packs Pimlico on the third Saturday in May. Masks were still required because of city and track protocols.

This was a short turnaround from the 2020 Preakness, which was run last fall as the third leg of the Triple Crown with no fans allowed.