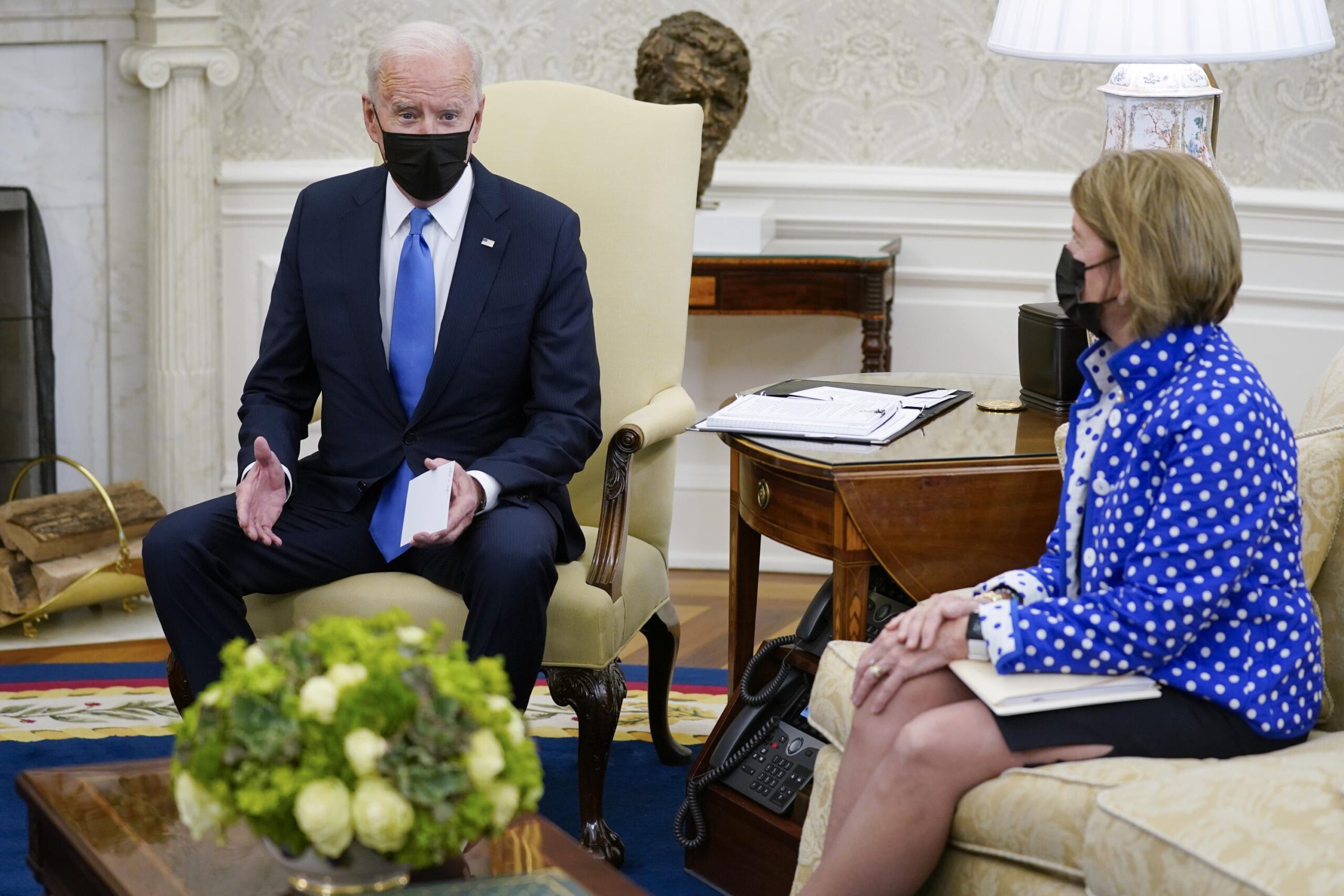 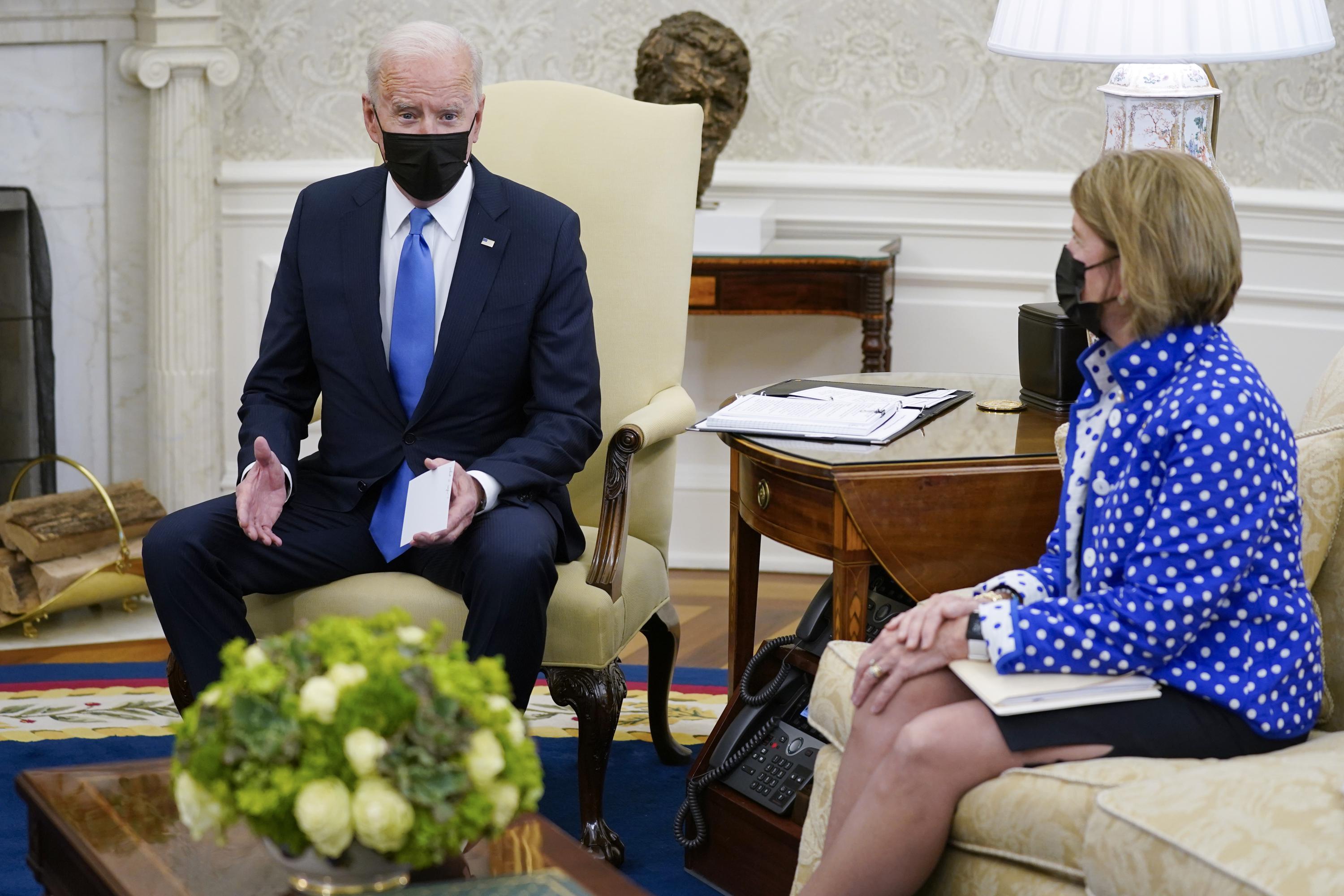 WASHINGTON (AP) — He’s known her for as long as he can remember, once challenging “Shel” to a heart-pumping zipline race down a rugged mountaintop.

The way she tells it, they actually first met when he came to measure the carpeting for her new house in the 1970s.

Manchin is a crucial 50th vote for Democrats on Biden’s sweeping proposals. Capito is the lead Republican negotiator on an alternative.

Both are heirs to the political tradition of the late Senate leader Robert C. Byrd, who funneled so much federal investment back home that hardly a highway or civic structure dots the landscape without his name.

Not only is the state counting on its two senators to deliver, but Manchin and Capito have become indispensable voices whose votes can make or break Biden’s big infrastructure agenda. Both senators have been to the White House as the president courts Congress on his top legislative priority.

“Suddenly you have this small, poor, mountainous state (that) has not just one but two senators highly involved with infrastructure,” said Robert Rupp, a political history professor at West Virginia Wesleyan College.

“If you wrote a script, it couldn’t be any better than that,” Rupp said.

The two children of political families have been here before. Capito’s late father, Arch Moore, was a three-term governor and six-term congressman. Manchin’s father and grandfather were mayors of his tiny hometown, Farmington, and an uncle was a state lawmaker and administrator.

Manchin remembers always seeing Capito, a few years younger, at events. She pinpoints their first meeting on another infrastructure project, when she was a newlywed who needed flooring in her home.

Her father knew just whom to call. Manchin’s father owned a furniture store and sent his son to measure the carpeting.

Theirs became a working relationship like so many in the state, forged on political ties and common needs, and enduring despite their opposing political parties. Capito served seven terms in the U.S. House before becoming the state’s first woman elected to the Senate in 2014. Manchin was the state’s two-term governor before winning the special election in 2010 for Byrd’s seat.

“I think he and I come from a perspective of a state, of wanting to get things done,” Capito said in a brief interview.

“We talk a lot, we don’t always agree, but we respectfully disagree,” she said. “We both realize that good ideas don’t necessarily come from just one party.”

With its stubborn poverty and unforgiving hilly terrain, West Virginia has long relied on lawmakers in Washington for investments that would otherwise go unfilled to connect their communities.

There’s a reason travelers drive along Robert C. Byrd roadways, named for the longtime Senate leader whose work became synonymous with the practice of earmarking federal funds for projects back home.

The state powered the nation with a legacy of coal mining, but it now faces pressure to shift away from fossil fuels and toward renewable energy sources.

Both Biden’s plan and the Capito alternative propose hefty investments for broadband, an element of infrastructure that has long been a bipartisan concern in West Virginia.

“We depend on infrastructure for every single thing we do,” said Mike Clowser, the head of the Contractors Association of West Virginia.

For a population that voted overwhelmingly, twice, for Donald Trump for president, there are vast potential political benefits, but also risks, to the senators’ roles in Biden’s infrastructure push.

Manchin is unlikely to support the president’s ambitious $2.3 trillion American Jobs Plan without changes, a key obstacle preventing Democrats from passing Biden’s proposals through the evenly split 50-50 Senate on their own, without Republican support.

He opposes Biden’s proposal to raise the corporate tax rate from 21% to 28% to pay for the infrastructure projects, but suggested a 25% corporate tax rate could be more palatable. As the chairman of the Energy and Natural Resources Committee, he insists measures to help coal miners in West Virginia and other rural states must be part of any final product.

With such centrist political views, Manchin can show voters back home he’s “a different type of Democrat,” said Jason MacDonald, an associate professor of political science at West Virginia University.

For Capito, being able to reach across the aisle to cut a deal with Biden would showcase her skills as seasoned legislator who can deliver for her state, no small accomplishment at a time when Republicans are out of power in Washington.

While Manchin can rankle his Democratic colleagues for being a no-vote that dooms so many of their priorities, Capito is also blazing a path by trying to bridge the partisan divide.

Senate Republican leader Mitch McConnell has entrusted Capito to lead the infrastructure negotiations with the White House, a sign of his confidence in her, according to a Republican granted anonymity to discuss the private views.

She is one of a handful of GOP senators who are counselors to McConnell, giving her a seat at the leadership table.

As the top Republican on the Environment and Public Works Committee, Capito has said the opening offer from Republicans was just that, as she engages in the give and take of negotiations with Biden’s team. McConnell has said they are willing to go to $800 billion on a infrastructure package, but raising corporate taxes to pay for it is a “red line” the GOP won’t cross.

The panel’s Democratic chairman, Delaware Sen. Tom Carper, who was born in Beckley, West Virginia, said of the two senators, “Our shared roots in West Virginia bond us closer together as we work on infrastructure.”

Bill Raney, who retired this year as the president of the West Virginia Coal Association, said that “with a rural state, like we have here, the topographical challenges with the mountains and valleys” compound the needs. Regarding two senators with such longtime connections, he said, “That’s what strikes me about this being so significant.”