The Latest: 100s of bodies found buried on India riverbanks 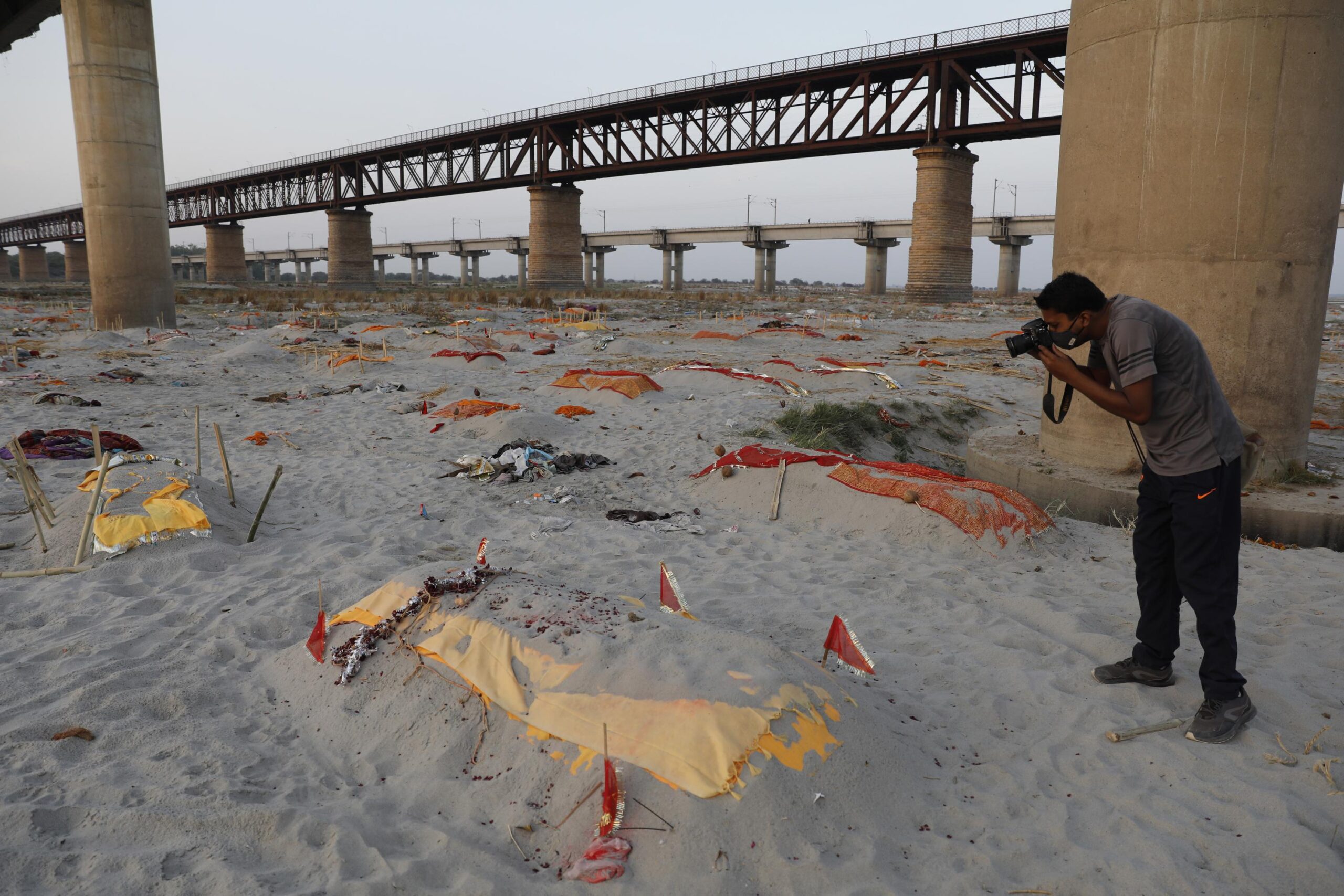 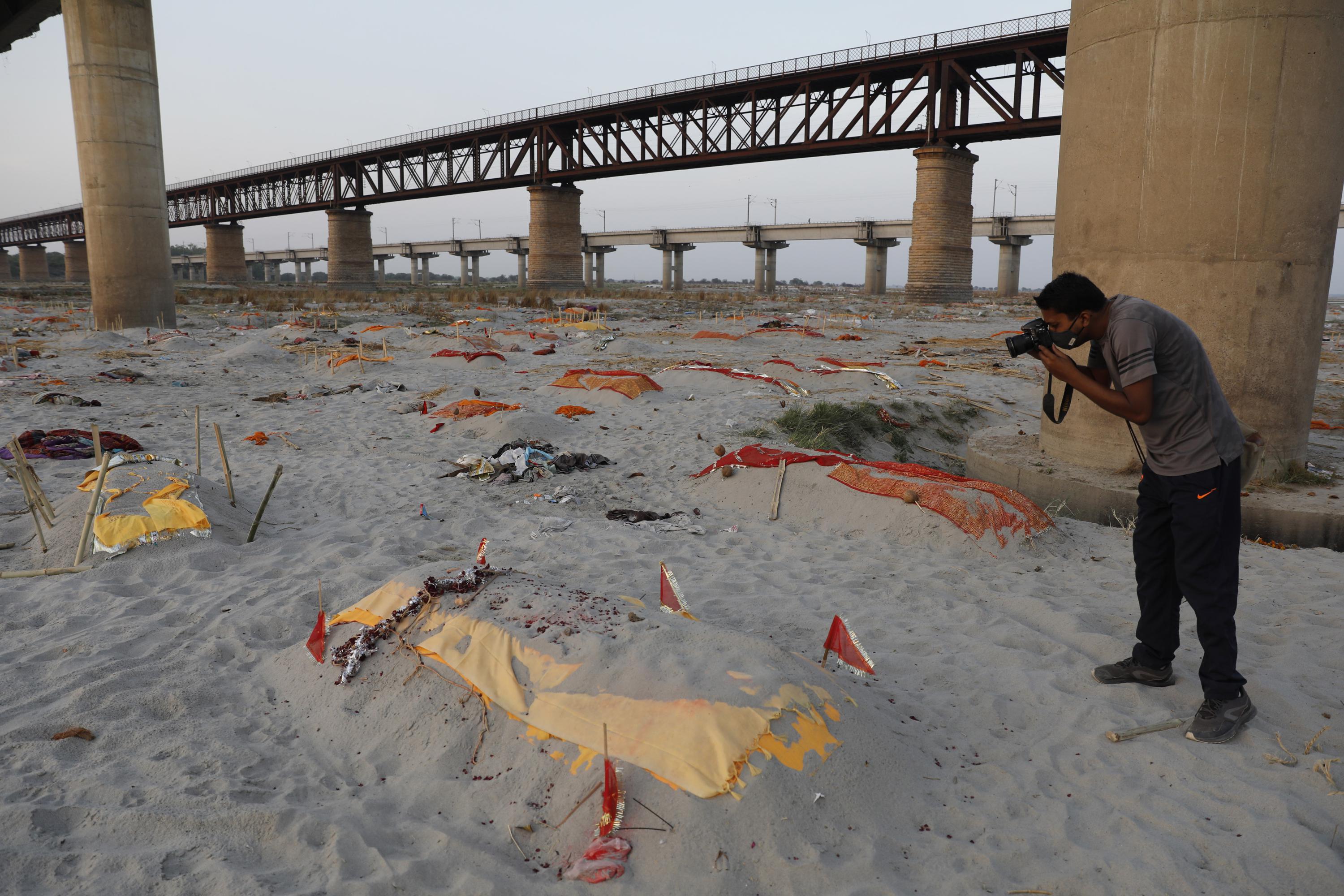 LONDON — Britain’s health minister says a fast-spreading coronavirus variant first identified in India is likely to become the dominant strain of the virus in the U.K.

Health officials are conducting door-to-door testing in several areas of the country in an attempt to curb the spread of the variant, which the government has warned could disrupt the U.K.’s reopening plans. Surge vaccinations in key regions are to begin shortly.

Health Secretary Matt Hancock said the new strain, formally known as B.1.617.2, is more transmissible than the U.K.’s dominant strain. He told the BBC “it is likely it will become the dominant variant.”

Hancock said scientists had a “high degree of confidence” that current vaccines work against the new variant, and there is no evidence it causes more a severe disease.

The government says it will go ahead with plans to ease lockdown restrictions on Monday. People in England will be able to eat a restaurant meal or drink a beer indoors, go to a movie and visit one another’s homes for the first time in months.

But Prime Minister Boris Johnson says that if the variant causes a big surge in cases it could scupper plans to lift all remaining restrictions on June 21.

— Peru runs into a daunting problem: a lack of cemetery space for COVID-19 victims

NEW DELHI — Police are reaching out to villagers in northern India to investigate the recovery of bodies buried in shallow sand graves or washing up on the Ganges River banks. There’s been speculation on social media that they are the remains of COVID-19 victims.

In jeeps and boats, police are using portable loudspeakers asking people not to dispose of bodies in rivers.

On Friday, rains exposed the cloth coverings of bodies buried on the riverbank in Prayagraj, a city in Uttar Pradesh state. A state government spokesman on Sunday denied local media reports that more than 1,000 corpses of COVID-19 victims were recovered from rivers in the past two weeks.

But others say COVID-19 deaths in the countryside are rising.

Ramesh Kumar Singh, a member of Bondhu Mahal Samiti, a philanthropic organization that helps cremate bodies, said the number of deaths is very high in rural areas, and poor people have been disposing of the bodies in the river because of the exorbitant cost of performing the last rites and a shortage of wood. The cremation cost has tripled up to 15,000 rupees ($210).

LIMA, Peru — After Joel Bautista died of a heart attack last month in Peru, his family tried unsuccessfully to find an available grave at four different cemeteries. After four days, they resorted to digging a hole in his garden.

The excavation in a poor neighborhood in the capital city of Lima was broadcast live on television, attracting the attention of authorities and prompting them to offer the family a space on the rocky slopes of a cemetery.

“If there is no solution, then there will be a space here,” Yeni Bautista told The Associated Press, explaining the family’s decision to dig at the foot of a tropical hibiscus tree after her brother’s body began to decompose.

The same plight is shared by other families across Peru.

After struggling to control the coronavirus pandemic for more than a year, the country now faces a parallel crisis: a lack of cemetery space. The problem affects everyone, not just relatives of COVID-19 victims, and some families have acted on their own, digging clandestine graves in areas surrounding some of Lima’s 65 cemeteries.

BEIJING — A COVID-19 outbreak in Mongolia appears to be easing after a six weeks in which the sparsely populated country’s coronavirus death toll rose from 15 to 219.

Authorities on Sunday reported 541 new cases and two deaths in the latest 24-hour period, China’s Xinhua News Agency said. It was the sixth straight day of under 600 new cases, and down from a peak of 1,356 cases about two weeks ago.

Coffee shops, gyms and swimming pools were allowed to reopen at 50% capacity this weekend as the Mongolian government continued a gradual lifting of restrictions following a four-week lockdown that ended May 8, Xinhua said.

A ban on restaurants, bars, religious services and large gatherings for sports and cultural events remained in effect, the Chinese news agency said.

ISTANBUL — Turkey’s interior ministry on Sunday lifted a full lockdown that had ordered people to stay home to fight COVID-19 infections, shifting to a less-restrictive program that still involved curfews on weeknights and weekends.

The ministry called the steps that apply from Monday to June 1 a “gradual normalization.”

Shopping malls will be able to reopen. Some businesses will remain closed, including gyms and cafes, but restaurants will be able to offer take away in addition to delivery. Preschools will resume in-person education but upper grades will continue remote learning.

Turks can return to their workplaces but will have to stay home from 9 p.m. to 5 a.m. on weekdays and all day Saturday and Sunday, with the exception of walking to a market to buy food. Civil servants will continue working remotely or in shifts in offices. Foreign tourists and workers with special permits are exempt.

SEOUL — The Asian Football Confederation has announced North Korea has pulled out of qualification for the 2022 World Cup.

“The (AFC) has today confirmed the withdrawal of the DPR Korea Football Association from the Asian Qualifiers,” the AFC said in a statement on Sunday.

Pyongyang has not yet given an official reason for pulling out of next month’s qualifiers for the tournament, to be held in Qatar in November and December 2022, but South Korean media has reported that it is because of concerns over COVID-19.

Due to the spread of the virus, there have been no qualifiers in Asia since November 2019 and in order to reduce travel as the games resume, the AFC has ruled that all group matches in the second round of qualification will be played in hubs. ___

ORLANDO, Fla. — Visitors to Walt Disney World and Universal Studios-Orlando were allowed Saturday to remove their masks when outdoors, except when on attractions, in line or riding transportation.

Florida’s major theme parks are adjusting face mask policies after the Centers for Disease Control and Prevention loosened its recommendations on Thursday as more people get vaccinated for the coronavirus. Masks remain mandatory indoors, except in restaurants when seated or actively eating and drinking.

SeaWorld Orlando and its sister park, Tampa’s Busch Gardens, are allowing guests who say they are fully vaccinated to remove their masks throughout the parks. The two parks will not require proof of vaccination but are asking guests to “respectfully comply.”

MILAN — Former Italian Premier Silvio Berlusconi was released from Milan’s San Raffaele Hospital on Saturday, where he was treated for complications related to an earlier bout with coronavirus.

The 84-year-old Berlusconi, who was diagnosed with COVID-19 last September, has been in and out of the hospital in recent weeks. He was most recently admitted last Monday. He also spent 24 days in the hospital under medical supervision in April.

The three-time former premier and media mogul left the hospital without passing in front of photographers and television cameras waiting outside. Last year, Berlusconi spent 10 days at the same hospital receiving treatment for COVID-19. He also received a pacemaker several years ago.

NEW YORK — Yale University is requiring its faculty and staff to get coronavirus vaccinations before the fall term, extending a requirement already imposed for students.

The private university says faculty members, staffers and academic trainees must be fully inoculated by Aug. 1, although there are provisions for exemptions for reasons based on medical conditions or religious or “strongly held” personal beliefs.

More than 350 colleges and universities around the country are requiring vaccinations for students, at least those living on-campus. However, requirements for employees are somewhat rare. That’s according to information compiled by The Chronicle of Higher Education.

BEIJING — China has canceled attempts to climb Mount Everest from its side of the world’s highest peak because of fears of importing coronavirus cases from neighboring Nepal.

China’s official Xinhua News Agency says the closure was confirmed in a notice from China’s General Administration of Sport. The move reflects the abundance of caution China has taken in dealing with the pandemic.

While China has mostly curbed domestic transmission of the coronavirus, Nepal is experiencing a surge with record numbers of new infections and deaths.

China had issued permits to 38 people to climb Mount Everest this spring, and Nepal to 408 climbers. In Nepal, several climbers have reported testing positive for the coronavirus after they were brought down from the Everest base camp.

The month of May generally has the best weather for climbing Everest. Scores have reached the summit this week and more are expected to make attempts later this month once the weather improves. Two climbers have died on the Nepalese side, one Swiss and one American.