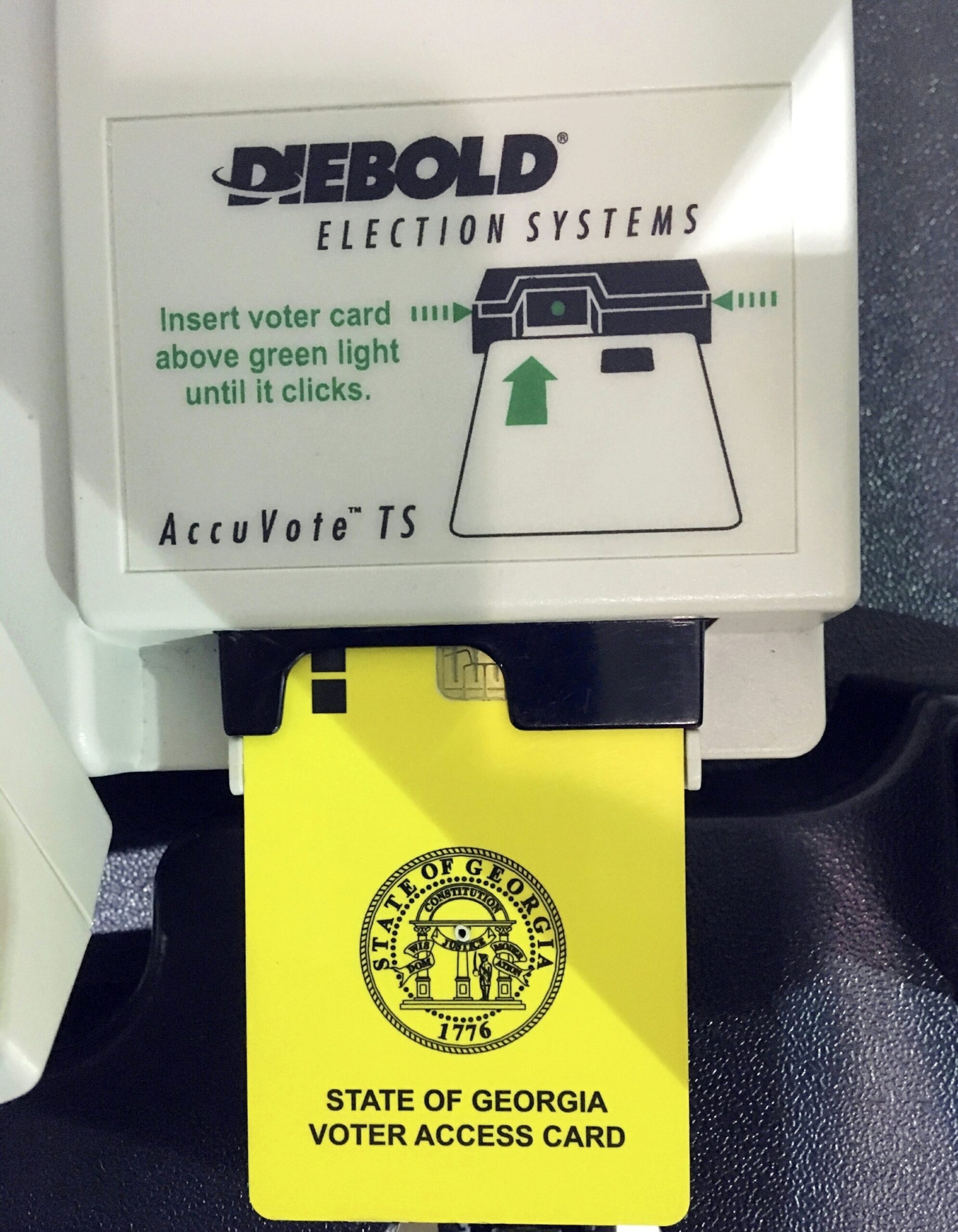 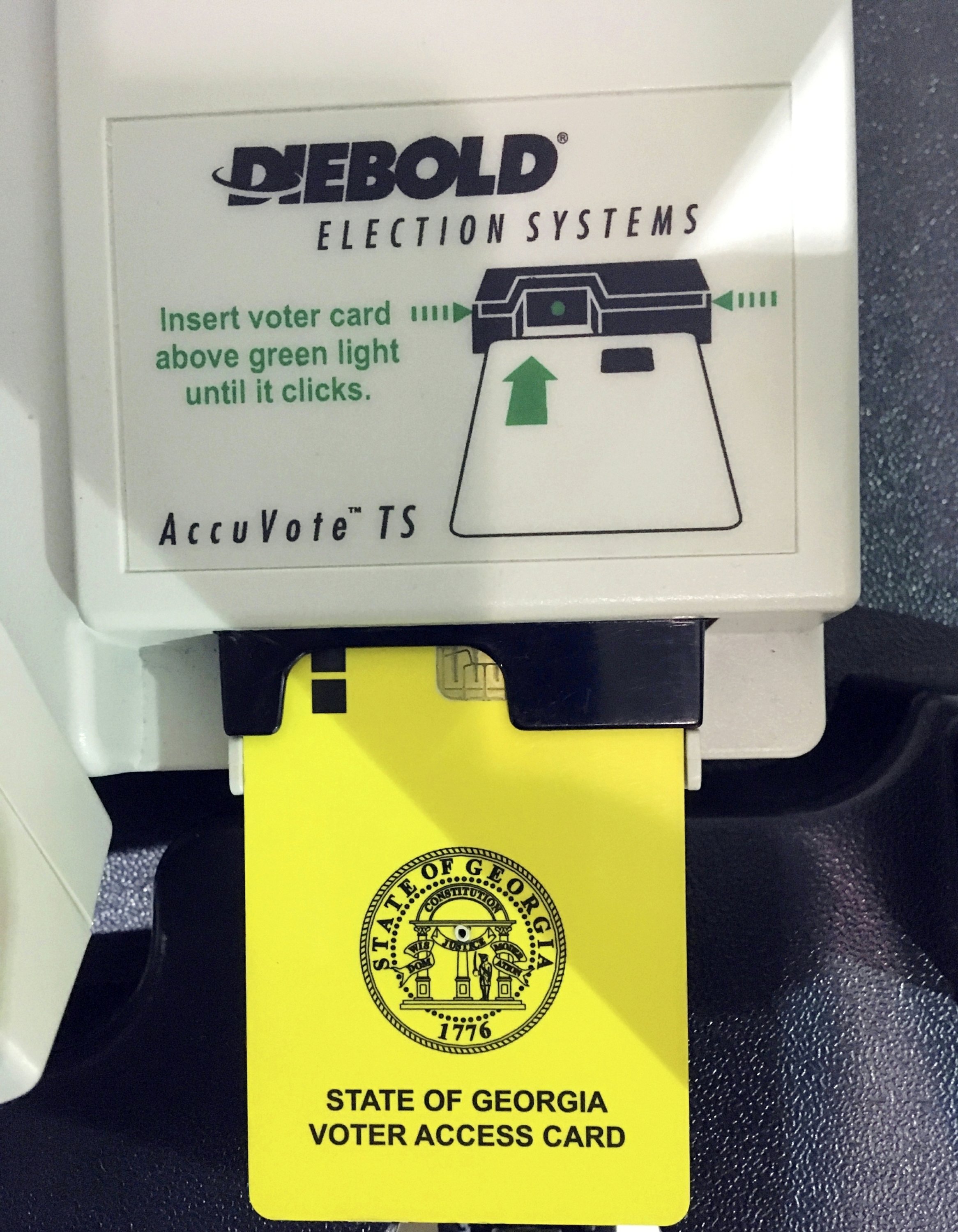 FILE – This May 22, 2018, file photo, shows a voter access card inserted in a reader during voting in the Georgia primary in Kennesaw, Ga. A federal judge has ordered Georgia to stop using its outdated voting machines after 2019. U.S. District Judge Amy Totenberg on Thursday, Aug. 15, 2019, issued the order after voting integrity advocates and individual voters asked her to order the state to immediately switch to hand-marked paper ballots. (AP Photo/Mike Stewart, File)

FILE – This May 22, 2018, file photo, shows a voter access card inserted in a reader during voting in the Georgia primary in Kennesaw, Ga. A federal judge has ordered Georgia to stop using its outdated voting machines after 2019. U.S. District Judge Amy Totenberg on Thursday, Aug. 15, 2019, issued the order after voting integrity advocates and individual voters asked her to order the state to immediately switch to hand-marked paper ballots. (AP Photo/Mike Stewart, File)

ATLANTA (AP) — A federal judge overseeing a challenge to Georgia’s outdated voting system said that after years of inaction in the face of warnings about vulnerabilities, state officials have finally taken a solid step in the right direction. But she foreshadowed a looming fight over the state’s new system, writing that “it may be ‘like ‘déjà vu all over again.’”

U.S. District Judge Amy Totenberg’s order on Thursday prohibits the state from using its antiquated paperless touchscreen machines and election management system beyond this year. She also said the state must be ready to use hand-marked paper ballots if its new system isn’t in place for the March 24 presidential primary election.

Totenberg also said the plaintiffs would likely win at trial, citing “the mountain of voter testimony showing that these vulnerabilities have a tangible impact on these voters’ attempts to exercise their fundamental right to cast a ballot and have their vote counted.”

Election integrity advocates and individual voters sued Georgia election officials in 2017 alleging that the touchscreen voting machines the state has used since 2002 are unsecure and vulnerable to hacking. They had asked Totenberg to order an immediate switch to hand-marked paper ballots.

Totenberg had declined a similar request last year ahead of last November’s gubernatorial election, and she again held back from ordering an immediate switch on Thursday, citing concerns about the state’s capacity to make an interim switch to hand-marked paper ballots for special and municipal elections this fall while also working to implement a new system.

This ruling applies only to Georgia, but at least parts of eight other states still use paperless balloting. Using voter registration and turnout data, the Brennan Center for Justice at NYU School of Law estimated in a report this week that as many as 12% of voters, or around 16 million people, will vote on paperless equipment in November 2020.

Georgia’s new system , following specifications approved by the Republican-led state legislature, was certified last week by Secretary of State Brad Raffensperger, who said it will be in place for the primaries. The state’s $106 million contract with Denver-based Dominion Voting Systems includes new touchscreen voting machines that print a paper record with a code that’s read by a scanner.

The plaintiffs in this lawsuit have said the new machines have many of the same vulnerabilities as the old ones. They also object to the fact that the portion of the printed record that’s read by the scanner is a QR code, not human-verifiable text, meaning voters have to trust that the code accurately reflects their selections.

Totenberg praised the legislation providing for a new system as “an essential step forward out of the quagmire, even if just to terminate use of an antiquated vulnerable voting system.”

“The wisdom or legal conformity of the Secretary of State’s selection of a new vendor’s particular ballot system though is not the question now before the Court,” she wrote, adding in a footnote that a report last year from the National Academies of Sciences, Engineering, and Medicine recommends the use of paper ballots because of the vulnerabilities of electronic systems.

Perhaps alluding to the fact that the plaintiffs have said they plan to challenge the new system in court, Totenberg quoted baseball legend Yogi Berra, writing: “The past may here be prologue anew — it may be ‘like déjà vu all over again.’”

The state, she wrote, has “previously minimized, erased, or dodged the issues underlying this case.” For that reason, she wrote, she devoted space in her 153-page order to meticulously recounting the history of the case and related actions, or inaction, by the state “to ensure transparency for the future.”

Both sides in the case saw victory in Totenberg’s order.

″(W)e are pleased the Court endorsed the policy decisions of the state’s elected officials to move to a new paper ballot voting system in time for the 2020 elections while not disrupting the 2019 elections,” Raffensperger said in an emailed statement. “These activist plaintiffs continue fruitlessly attempting to force their preferred policy outcomes on Georgia voters without success.”

Marilyn Marks, executive director of the Coalition for Good Governance, one of the plaintiffs in the case, wrote in an email that it was important that Totenberg “recognized Plaintiffs concerns about the State’s plan to move to another form of electronic voting — electronic ballot marking devices.” The voters’ right to accountable elections requires hand-marked paper ballots counted by optical scanners with thorough audits, she wrote.

David Cross, a lawyer representing several Georgia voters in the case, called the ruling a “big win for all Georgia voters and those working across the country to secure elections and protect the right to vote.”

The plaintiffs had asked Totenberg to order the state to immediately stop using the current voting machines for special and municipal elections. They also said they feared that the timeline for the implementation of the new machines is too tight , which could result in the old machines being used for 2020 elections.

Totenberg’s order made it clear she shares that fear, noting that the state had already scaled back a planned pilot program and postponed deadlines for the implementation of the new system.

She ordered election officials to develop a contingency plan in case the new system isn’t in place. It includes using hand-marked paper ballots in coordination with scanners and other equipment available through the state’s contract with Dominion. She ordered a pilot of that contingency plan during elections this November.

Totenberg noted that Harri Hursti, a leading voting security expert, discovered flaws in 2006 in the electronic voting machines used in Georgia that forced the manufacturer to create a security patch, but she said there’s no evidence Georgia ever implemented that patch, or made any upgrades to protect the integrity of its machines.

Hursti told The Associated Press that Thursday’s ruling should raise awareness: He said the vulnerabilities of the machines Totenberg ordered scrapped extend as well to the electronic ballot-marking devices being bought to replace them. He said “the only viable option” is hand-marked paper ballots that are optically scanned with vigorous audits of the voter’s original marks.